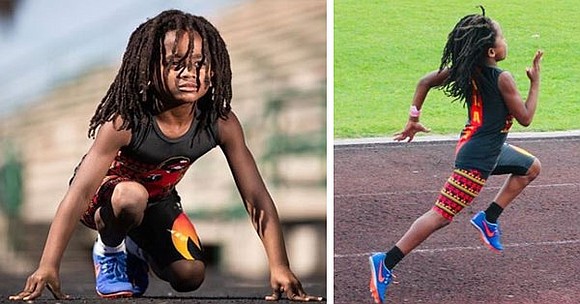 At the age of 7, Rudolph Ingram Jr. also known as “Blaze the Great” has already broken several records and has became the fastest boy in the country, showing early signs of possibly becoming the next Usain Bolt.

Blaze’s father Rudolph Ingram Sr. shared that the little boy started training when he was only 4-years old right after watching the Olympics. Since then, he has shown great athleticism.

“I can give him all the tools to be great, but his drive and work ethic and competitive mentality, it sets the bar so much higher,” Rudolph Sr. told ABC Action News.

His most recent 100-meter dash clocked at 13.48 seconds smashed the USA Track and Field records for his age group. It was even just 13.48 seconds behind the record for sprinters 17-18 years old.

“It feel great, anyways I trained for it,” said Blaze, who dreams “to get into the NFL” someday.

His father has always been hands-on in his training to prepare for his future, but still lets him be a kid.

“He watched the Usain Bolt documentary, he has seen a lot of those people’s documentaries and he realizes that they were doing the same thing that [he] was doing at that age. So [he] could see where this would lead to,” he said.

Blaze has caught the attention of many people, including football players O.J. Howard and Mike Evans from Tampa Bay Bucs and basketball star LeBron James. His verified Instagram account @blaze_813 has more than 500,000 followers.

Moreover, his father is very proud of what he has accomplished and will accomplish in the future.