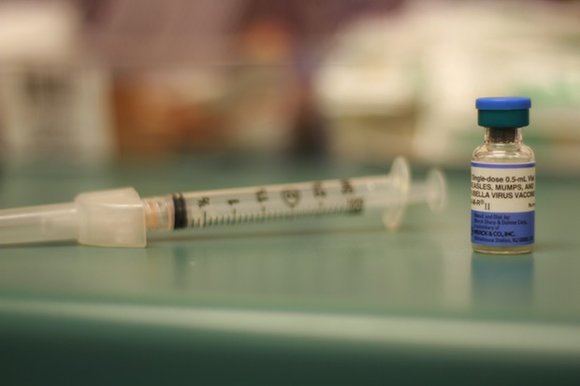 A close-up photograph of an MMR (measles, mumps and rubella) vaccine vial with a syringe in background.

By Kathy Calvin and Gail McGovern

(CNN) -- A child was hospitalized in Brooklyn in the largest measles outbreak in New York state in decades. A 17-year-old died outside Paris, France. At least 12 children suffered the same fate in Brazil.

And these are not just isolated cases. In 2018, in Europe, 72 people have died and more than 59,000 have fallen ill with measles -- greater than double the number from the previous year. Meanwhile, nearly 17,000 people have caught the virus in South America and 76 people have died in Venezuela alone, where a regional outbreak began.

In the United States, Europe and Latin America, we're seeing more and more headlines proclaiming a child has suffered due to measles -- a disease that is easily preventable by vaccination.

As the disease surges to its highest levels in more than a decade, it's imperative that we all come together to stop the world from backsliding any further -- and that means ensuring everyone gets vaccinated. Unless we act -- and fast -- more people will get the virus and die. And many of the victims will be children.

Together with Gavi, the Vaccine Alliance, we have supported the vaccination of over 2 billion children, resulting in more than an estimated 21 million lives saved. Since 2001, the start of the Measles and Rubella Initiative (M&RI), a global partnership made up of the American Red Cross, the United Nations Foundation, the World Health Organization, US Centers for Disease Control and Prevention and UNICEF, we have dedicated our efforts to eliminate not only measles, but rubella and congenital rubella syndrome (CRS), as well.

But now, after years of winning hard-fought battles, the current outbreaks threaten our progress. Measles may once again become common in places previously measles-free, as fewer children are being vaccinated.

This is the reason outbreaks are occurring in Europe and the Americas -- vaccination coverage has dropped, which means not enough people are being vaccinated. At least 95% of a population must receive two doses of the measles-containing vaccine to stop the virus from spreading, and in many areas with outbreaks, this is not happening.

Failure to vaccinate has far-reaching consequences -- from financial hardship in the form of lost wages while caring for a sick child, to a child developing life-long disabilities or dying. Some suffer complications such as blindness, encephalitis (brain swelling caused by infection), severe diarrhea, dehydration, ear infections and pneumonia.

We have the tools, knowledge and know-how to stop this avoidable disease. To build on this success and continue to move toward the elimination of measles, we must close immunity gaps around the world by reaching every child with lifesaving vaccines and detecting and responding quickly to stop every measles infection from spreading.

In the past four years alone, the global Red Cross and Red Crescent network says it has mobilized thousands of volunteers around the world who have visited millions of households in the poorest and most marginalized communities to stress the importance of vaccination. Such capabilities within each country help to ensure strong community safety nets that can be mobilized to protect the world from other health threats.

The recently published report, Progress towards Regional Measles Elimination -- Worldwide, 2000-2017, in the World Health Organization Weekly Epidemiological Record shows that over 109,000 vaccine-preventable deaths still occurred last year. We call on ministers of health to commit to strengthening their immunization activities and to intensify surveillance to quickly detect cases and prevent this needless suffering. We call on parents to vaccinate their children.

With your support, the United Nations Foundation and the American Red Cross, along with other M&RI partners, pledge to continue to provide vaccines, training for health workers, technical assistance and community outreach and education.

We can -- and we must -- protect our kids against measles, and once again regain the progress we've made against this disease.