GM Offers $25,000 Reward to Nab Those Hanging Nooses in Plant 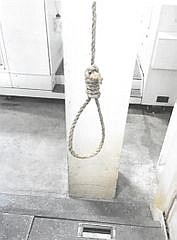 General Motors says it is offering a $25,000 reward to anyone who has information about racist graffiti and nooses found at a plant in Toledo, Ohio, nearly two years ago. The reward, which GM said it put up in January, follows a story the Free Press first reported in November that nine black workers are suing GM, alleging the carmaker has allowed racial discrimination and failed to take prompt corrective action after the workers reported acts of racism at the GM Powertrain & Fabrications plant in Toledo. The lawsuit was filed in September and the racial incidents started in spring of 2017. GM said its reward is offered through a CrimeStoppers program administered by Toledo police and the FBI. An attorney for the litigants did not reply to a request for comment. GM has said it has taken several steps to address the improper behavior, even stopping production to train workers on antiharassment and antidiscrimination policies after a noose was found in March 2017.