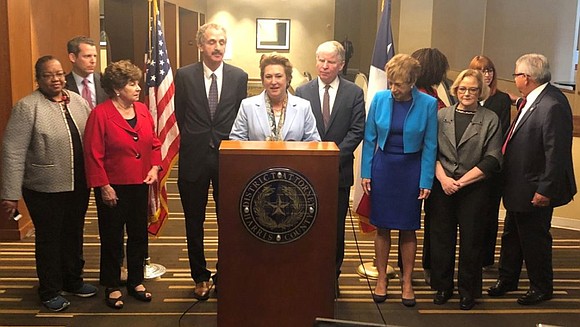 The Harris County Commissioners Court voted Tuesday against District Attorney Kim Ogg’s request for a $20 million budget increase to hire more prosecutors. Under Ogg’s proposal, 102 prosecutors would have been hired, an increase of roughly 40 percent. Ogg said her aim was to reduce the county’s backlog of around 40,000 cases, which had been exacerbated after the Harris County Criminal Justice Center was flooded during Hurricane Harvey. Some progressive groups, such as the Texas Organizing Project and the Texas Criminal Justice Coalition, had also spoken out against the proposal, accusing Ogg of violating her campaign pledge to reform the criminal justice system. The groups said that more prosecutors would lead to more people being jailed. But Ogg and those who supported the proposal said the aim wasn’t to jail more people, but rather to speed up the criminal justice process.