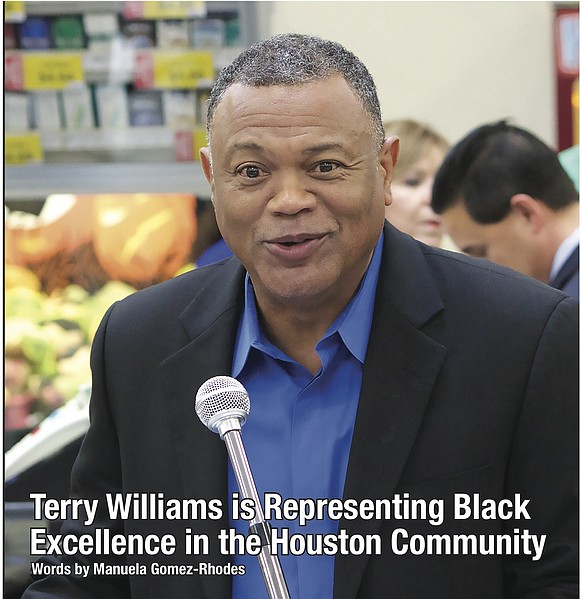 By Manuela Gomez-Rhodes, Special to Style

We can all agree that breaking barriers is something we strive for in our professional career as not only something you can be proud of for yourself but also serve as an inspiration to make those around you, such as your community, proud as well.

No man knows more about breaking barriers than Terry Williams. From being the first African American to be voted student body president at Eisenhower High School in 1980, to becoming the first African American to hold the title of Vice President of Operations at H-E-B. Williams is one of Houston’s most successful professionals who has a long history of not only breaking barriers in his community but also inspiring and providing opportunities for the next generation of professionals to break barriers as well.

We had the amazing opportunity to interview Williams at the site of one of his latest accomplishments and probably the one he is most excited about; the groundbreaking ceremony for H-E-B’s newest, state of the art, Third Ward location at MacGregor and 288. He shed some light about what his journey has been like, what he considers to be his legacy, and what he thinks the next generation of professionals should focus on while on their path to success.

Houston Style Magazine (HSM): First off, tell us about your new H-E-B location. Why has this Third Ward location captured your heart?

Terry Williams: This location is very personal for me because I was there since the very beginning of the conversation about its construction 25 years ago. Also, my late father, who is my best friend and fraternity brother, was the door greeter at our first location in this area for 10 years. He was the first and last door greeter there until his death. The one thing he kept saying to me was, ‘Son the customers love the store, but we really need a bigger store; the customer count is just too big.’ To see it come to fruition, just warms my heart because I feel like it’s very personal for me and finally, we now have something my father would be very proud of.

HSM: What do you love the most about Houston and about being from here?

TW: Well, I just love Houston. I am actually the only H-E-B officer in Houston who was actually raised and went to school here. Everybody else comes from California, or Boston, or other places around the USA. I’ve never had to go anywhere else. I’ve been with H-E-B for 27 years and have had the pleasure to stay close to my family and my community throughout my entire career.

HSM: Out of all of your accomplishments, what are you most proud of?

TW: What I am most proud of is not with H-E-B, but it’s with my kids. Bringing up great kids that are doing very, very well within the community. My son is one of 10 ministers at Lakewood Church. He owns a couple of gyms and is doing very well with his wife. My daughter just became a clinical psychologist and the first doctor in our family. I am very, very pleased with what my kids have been able to become.

HSM: What advice would you give to young professionals who are just starting out?

TW: Be determined and be aggressive. Don’t let anyone turn you around. What ever your goal is, go for it with vigor and with passion, and you will make it in society.

HSM: What projects or endeavors are you looking forward to the most this year?

TW: I’m really looking forward to opening up this new store. That’s where I am right now and I can’t wait until we are able to check this one off. In my career, I’ve worked on a few stores that have meant a lot to me. We opened a store in Beaumont at the old Beaumont hospital. We took over that location and that’s where I was born. I also got to go back to my alma mater, Sam Houston State University, and open a big store in Huntsville. That was another big one for me. Now to open this one here for my father and mother; my mom actually lives in this community right now, and to see this come to fruition is amazing. I’ll be three-for-three.

HSM: How do you balance a successful career and a personal life?

TW: Now that one is tough. laughs Family, the career, other things I do in the community; I am the former president/chairman of the board for United Negro Collage Fund State of Texas, former president/chairman of the board for SHSU Alumni, and, most recent, the first president for Aldine ISD Foundation Board. So to do those, while working for H-E-B, and having kids, makes it very, very hard to be completely balanced at anything.

HSM: What advice would you give to a young professional who has a young family and is trying to excel?

TW: The best thing I could tell them is to be patient and know your priorities. The family has to be first. You need to make the money to make a better life for your family, but also always put them first and never second for anything.

HSM: You’re a man of many firsts in the African American community. Was it your goal to be a barrier breaker or, were you more focused on personal development and the barriers just kind of broke themselves?

TW: I would definitely say I was focused on personal development and everything else just happened that way. I didn’t know I was on the path to do things that other people haven’t done. My father was my biggest mentor. I remember running the first H-E-B in the city of Houston and he always told me, ‘Son, you’re going to be an officer one day’ and I would think, there’s no way. There is no other African American who has even been a district manager, never the less an officer. Then, when I became the first African American district manager in the company’s history he said, ‘You’re going to be the first vice president,’ and it happened. I needed that guidance from him because I couldn’t see it for myself, but he could see it. He wanted me to keep the hard work going, do what I needed to do, and he knew that eventually I’d get there and I did.

HSM: Long after you’re gone, when your kids or others are speaking of you, what do you want to be remembered by?

TW: I want to be remembered as someone who was good with family, friends, and fraternity. I call it the ‘3 F’s’. It means everything to me that I am very close to all my family, all my friends, and all my fraternity brothers. Legacy at H-E-B is good, but it’s more about family to me. If I can be considered by them as somebody who has been solid and has had their back; then, that would mean the world to me and I can go away at any time after that.

HSM: Since we are celebrating Black History Month, what would you say is the most important thing for someone to learn or take away from this historic time?

TW: I’d say know your personal history and know what happened in history. Not from a national perspective, but from a local perspective. Like we talked about today, this store started not 4 years ago, but 25 years ago. Those who started it deserve credit, not just those who are working on it today. It’s all of us collectively who make everything happen. I would just stress to everyone to know their Black History and know where you started so you can cherish where you are now.

It’s safe to say that Williams has opened up a lot of doors for African Americans in the Texas community. He continues to do so every day through his work at H-E-B and philanthropic efforts everywhere else. He is not just a great example of where hard work and determination can lead you, but also what being a great father and friend can lead your family and community.

Houston Style Magazine are very excited and look forward to seeing his vision come to fruition later this year at the new H-E-B store in Third Ward.