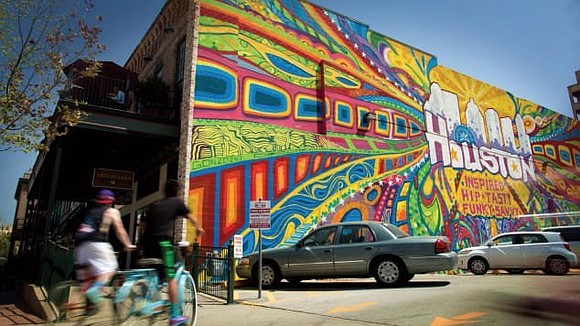 (CNN) -- From its integral role in the world's first moon landing 50 years ago this July to a new lineup of appealing options in the arts and culinary scenes, Houston has never been more ripe for exploration.

It wins in the aesthetics department, too: The much-photographed skyline is dotted with skyscrapers in architectural styles ranging from Art Deco to minimalist, and this city of more than 2.3 million residents -- the country's fourth largest -- has countless green spaces and parks for running, biking or simply unwinding under the big Texas sky.

While the greater Houston area is sprawling, many of the top travel attractions are concentrated in downtown. Tourists can get around this part of town by relying on the efficient Metro Rail system, but they'll need a car to venture farther afield.

Coupled with its remarkable turnaround from 2017's HurricaneHarvey, which caused an estimated $1.5 billion worth of damage to the city and forced thousands to be evacuated, Houston is hands down a must-visit destination this year.

Here's what to do when you go to Houston with nine of its biggest travel draws:

Situated in the Greater Houston area, this 250,000-square-foot homage to all things space should be at the top of the list for every tourist. "Visit Space Center Houston to experience the heart of human space exploration," says William T. Harris, its president and CEO.

The Space Center Houston is also the official visitor's center for the NASA Johnson Space Center, located across the street and home to the Mission Control Room, from which Apollo 11 -- that incredible moon landing -- and other missions were monitored.

Space Center Houston admission is $29.95 and includes a tram tour to see Johnson Space Center. It's easy to pass a half day or more here. Space Center Houston has an impressive collection of space-related artifacts including multiple flown spacecrafts such as the Apollo 17 command module, used in the last manned mission to the moon in 1972. The center also has the world's largest collection of moon rocks on public display.

Johnson Space Center, a National Historic Landmark, is undergoing a restoration of the Mission Control Room. When the restored room reopens in July, visitors will be able to see the room exactly as it was during Apollo 11, complete with the illuminated black-and-white screens on the control room consoles displaying video from the world-famous mission. On display will be the actual consoles that flight controllers used to monitor the moon landing.

In July, Houston will celebrate the 50th anniversary of Apollo 11 with a series of events around town. Space Center Houston is hosting a variety of Apollo-themed events, including a Thought Leader Series where NASA experts will talk about the historic feats of the Apollo era and the future of human space exploration. The Space Center will also host a "Space On-Screen" film series showing space-related films.

On July 20, the day of the actual moon landing, the center will be open for extended hours and have a packed schedule of events during the day and throughout the evening.

While details are still being worked out, various venues in the city are also hosting events for Space City Month, according to Leah Shah, a representative from Visit Houston. A few restaurants and bars are expected to offer space-themed cocktails and food menus.

Part of The Menil Collection, a 30-acre microneighborhood of art within the Montrose neighborhood, Menil Drawing Institute opened in November to much fanfare and has since gotten international acclaim from art world critics and heavy hitters.

It claims to be the world's first freestanding building dedicated to modern and contemporary drawings, and according to spokesman Tommy Napier, was built for their acquisition, study, exhibition, conservation and storage.

The 30,000-square-foot institute hosts rotating drawing exhibitions, which change every three to four months. Its second exhibition opens February 15 and is dedicated to drawings by Roni Horn, a renowned visual artist who resides and works in New York and Iceland.

Also, the building is as notable as the art inside: Designed by Los Angeles-based architect Johnston Marklee, it's constructed of white steel and is covered in some parts by cypress trees, giving it an outdoorsy feel. Built around three courtyards lined with lush magnolia and oak trees, it's not a bad place to while away a couple of hours.

The Menil Collection itself is comprised of a main building with special exhibitions and a diverse permanent collection that includes works by Matisse and Picasso and three other museum buildings: one dedicated to the artist Cy Twombly, another to the artist Dan Flavin and the third to year-long installation works.

At a sprawling 14 acres, this museum is the largest cultural institution in the Southwest. Thanks to a $450 million expansion, which will be completed sometime in 2020, it's going to get even bigger and will include a 164,000-square-foot building for modern and contemporary art.

But travelers don't need to wait for this project to be finished to make a visit because there's already plenty of renowned art to see.

The museum's collection of more than 70,000 objects comes from all world cultures, dating from antiquity to present. It includes notable American art such as Georgia O'Keefe paintings, European paintings including works by Rembrandt and Goya, Pre-Columbian and African gold, photography, prints and drawings, 20th- and 21st-century paintings and sculptures and Latin American art. General admission is $17.

The nation's fourth largest Holocaust Museum will more than double in size from, 21,000 to 57,000 square feet, when it reopens on June 22, following a nearly $50 million expansion. It's going to be the country's first fully bilingual English and Spanish Holocaust museum and will grow from one to four permanent galleries.

In addition to its already existing Bearing Witness Holocaust gallery, which is full of artifacts from before, during and after the Holocaust (a 1942 railcar that transported Jewish people to concentration camps in Germany is a highlight), a new human rights gallery will have displays of all UN-recognized genocides.

The second new gallery will display artwork by the Holocaust child survivor and painter Samuel Bak, and the third will focus on the writings of 18 young diarists, including Anne Frank, who died in genocides around the world. The museum will also host traveling exhibitions. General admission is $15, but free admission is extended to children and students.

This 17-block district in downtown Houston saw heavy flooding from Hurricane Harvey but is now back to its former glory. There are more than a dozen theaters here, ranging from small, independent houses to grand stages. The Wortham Theater Center, home to the Houston Grand Opera and the Houston Ballet, is the largest and has two performing halls: the 2,400-seat Brown Theater and the 1,000-seat Cullen Theater.

No matter the season, the Wortham hosts performances almost daily. One of the most highly anticipated shows this year, held from April 20 to May 5, is Mozart's "Don Giovanni," which is a co-production with the prestigious Royal Opera House in London.

Food halls are all the rage in Houston. Three are opening this year alone, while a fourth, Finn Hall, opened in December 2018. At 20,000-square-feet, it sits in downtown Houston and is home to 10 restaurants and two bars. All the vendors are locally based, and the choices are diverse. Dish Society, for example, serves farm-to-table American cuisine, such as chicken and biscuits, while Yong serves classic Korean dishes.

Bravery Hall, scheduled to open in February in downtown Houston, will house five chef-driven restaurants and feature a molecular cocktail bar and a spacious patio. Lyric Market, slated for a fall opening, is in Houston's Theater District and will have restaurants, specialty food purveyors, al fresco dining terraces, a 4,000-square-foot rooftop deck and an underground speakeasy.

Understory at Capitol Tower, a 35,000-square-foot project inside Capitol Tower's two-story atrium in downtown, is the largest of the food halls and opening this summer. It will house a full-service restaurant, seven chef-driven fast casual spots and a cocktail bar. The hall is connected to the city's seven-mile underground tunnel system and is expected to be an aesthetic showpiece that has white marble and copper finishes as well as walls with murals painted by local artists.

No, we're not joking here: Houston gets bragging rights for having top-brass gas station cuisine, and more and more notable eateries at gas stations continue to open. While the gas station joint culture has been around for several years, it's only now getting some national fame. The food is ridiculously tasty and incredibly inexpensive. Don't try to compare it to standard fast food because the quality is incomparable. On top of which, the portions are huge.

-- The family-run Sunrise Taquito at a Shell station in Washington Corridor. It serves fresh, made-to-order breakfasts. The chorizo and eggs taquitos, and the various breakfast plates with flour tortillas, refried beans and fried potatoes, are favorites.

-- Ekko's Greek Deli at a Valero station in Uptown is a staple for Houston's Greek immigrants and is known for its gyros, hummus and baklava.

-- The Shawarma Stop at a Shell station in the Museum District turns out delicious chicken and beef shawarma stuffed inside a pita and a variety of tender kebabs including ground beef and beef chunks.

The James Beard awards are the Oscars of the culinary world, and Houston snagged an eyebrow-raising dozen nominations last year.

Travelers should check out at least one of these nationally recognized restaurants when they're in town, and they're spoiled for choices.

There's Xochi, an airy spot in downtown that turns out Oaxacan inspired dishes and was nominated for Best New Restaurant (its chef, Hugo Ortega, won the James Beard for Best Chef in the Southwest in 2017).

For food with an ethnic flair, check out Crawfish & Noodles, serving Cajun and Vietnamese dishes; chef Trong Nguyen was nominated for Best Chef in the Southwest.

Although the Greater Houston area has nearly 900 hotels, travelers will have the best access to the city's highlights by choosing accommodations in one of three main neighborhoods: the Museum District, ideal for culture seekers; downtown, home to top restaurants and nightlife; and the Galleria area, which is a prime shopping destination.

These are only nine of the many reasons to plan a trip to Houston now. Once there, travelers will undoubtedly discover many more to add to the list.