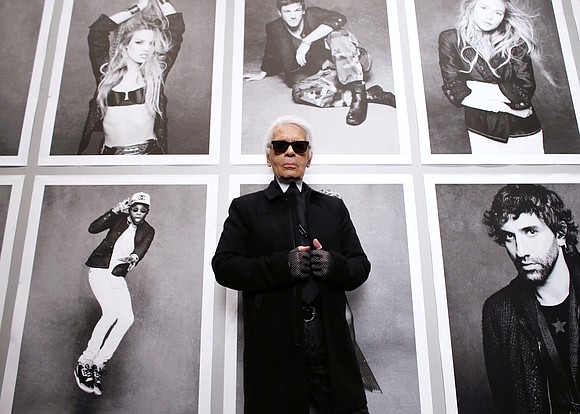 The influential German designer is best known for his work with the French luxury fashion house, along with his prodigious output. He was also the creative director at Fendi and his eponymous label. Patrick Kovarik/AFP/Getty Images

The influential German designer is best known for his work with the French luxury fashion house, along with his prodigious output. He was also the creative director at Fendi and his eponymous label.

Rumors had swirled about his health after he was absent from his Chanel show in late January due to what the company described as tiredness.

Lagerfeld, who transformed Chanel after taking the helm in 1983, was rarely seen without his dark glasses, a silver ponytail and fingerless gloves -- gaining him the reputation as the most recognizable man in fashion.

The head of LVMH, which owns rival house Louis Vuitton, said the fashion world had "lost a great inspiration."

"We have lost a creative genius who helped to make Paris the fashion capital of the world, and Fendi one of the most innovative Italian houses. We owe him a great deal: his taste and talent were the most exceptional I have ever known," Bernard Arnault, the chairman and CEO of LVMH, said in a statement.

"The death of this dear friend deeply saddens me, my wife and my children. We loved and admired him deeply."

Born in Hamburg, Germany, Lagerfeld went on to win a womenswear design competition in 1954.

He got his start in Paris working under Pierre Balmain in the 1950s, moving three years later to the House of Patou. He had stints as a freelancer for Chloé and was hired by Fendi in 1967 as a consultant director, responsible for modernizing the Italian house's fur lines.

His decision to helm Chanel, founded by Gabrielle "Coco" Chanel, turned him into one of the most celebrated fashion designers of the 20th century.

Celebrities and giants of the fashion world have been making tributes to late designer.

Donatella Versace called him a genius who "touched the lives of so many," especially her late brother Gianni Versace.

The Editor-in-Chief of British Vogue, Edward Enninful, called Lagerfeld "one of the greatest designers in the history of fashion."

"He has exerted an incredible influence over the fashion industry over the past six decades," Enninful said in a statement.

"Karl was a genius and always so kind and generous to me both personally and professionally," Victoria Beckham wrote.

"I came to France to see you this week and introduce you to my daughter ... I'm heartbroken I was too late," wrote actress Diane Kruger.