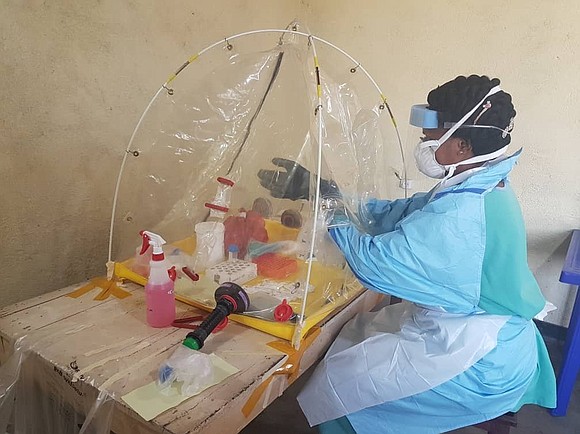 A lab worker at a mobile lab set up inside Beni Reference Hospital to analyze and test samples from suspected Ebola cases on August 3.

(CNN) -- The Democratic Republic of Congo has reached a grim new milestone in the Ebola outbreak that began August 1: The total number of probable patients is 608 as of Wednesday, with 368 deaths, the Ministry of Health said. An additional 29 people who doctors suspect may be sick with Ebola are under investigation. The ministry also reported that 207 people have recovered from the life-threatening illness.

On average, Ebola -- which causes fever, severe headache and in some cases hemorrhaging -- kills about half of those infected, but fatality rates in individual outbreaks have varied. The latest outbreak has a case fatality rate of about 60%.

The outbreak is the second-deadliest and second-largest in history, topped only by one in West Africa in 2014, when the disease killed more than 11,000 people, according to the World Health Organization.

Those intimately affected include health care workers, some of whom have traveled to the region from other nations. An American who was providing medical assistance in Congo experienced a possible exposure to the Ebola virus and is being monitored for symptoms in the United States, according to a statement from the Nebraska Medical Center on Saturday. The medical center did not disclose the person's identity due to privacy concerns.

North Kivu province, which includes the cities of Beni, Kalunguta and Mabalako, remains the epicenter of the outbreak, though cases have been reported in neighboring Ituri province, according to the World Health Organization. The two provinces are among the most populous in the nation and border Uganda, Rwanda and South Sudan.

Not only is North Kivu experiencing this deadly Ebola outbreak, but long-term conflict smolders there, with 50 armed groups causing intermittent violence, according to WHO. The UN public health agency estimates that more than a million refugees and internally displaced people are traveling through and out of North Kivu and Ituri, and this movement is a potential risk factor for the spread of Ebola. Another complication: a high number of malaria cases in the region.

The minister of health celebrated Christmas by visiting the response teams in Beni and Butembo. Two days later, on Thursday, he reported that election protesters vandalized facilities inside the Beni Transit Center compound where suspicious cases await laboratory test results.

"The activities of the response to Beni and Butembo have been severely disrupted following the demonstrations of the population," he said in a statement. "The majority of the teams were unable to deploy in both cities but were able to work remotely with local health workers who maintained minimal field activity." Vaccination activities also were suspended.

Dr. Tedros Adhanom Ghebreyesus, WHO's director-general, also responded to the "deterioration of the security situation" in a statement Friday.

"We have reached a critical point in the Ebola response. After an intensification of field activities, we were seeing hopeful signs in many areas, including a recent decrease in cases in Beni," Tedros wrote. "These gains could be lost if we suffer a period of prolonged insecurity, resulting in increased transmission. That would be a tragedy for the local population, who have already suffered too much."

In late November, the ministry announced the launch of the first randomized control trial for three Ebola treatment drugs. Additionally, 54,153 people have been vaccinated since early August.