Mueller wants to know about 2016 Trump campaign's ties to NRA 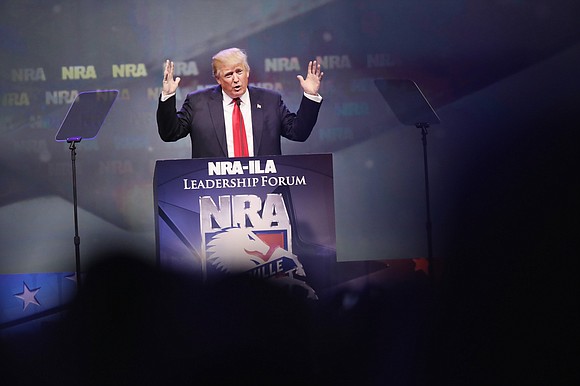 Special counsel Robert Mueller's team has expressed interest in the Trump campaign's relationship with the National Rifle Association during the 2016 campaign.

(CNN) -- Special counsel Robert Mueller's team has expressed interest in the Trump campaign's relationship with the National Rifle Association during the 2016 campaign.

"When I was interviewed by the special counsel's office, I was asked about the Trump campaign and our dealings with the NRA," Sam Nunberg, a former Trump campaign aide, told CNN.

The special counsel's team was curious to learn more about how Donald Trump and his operatives first formed a relationship with the NRA and how Trump wound up speaking at the group's annual meeting in 2015, just months before announcing his presidential bid, Nunberg said.

Nunberg's interview with Mueller's team in February 2018 offers the first indication that the special counsel has been probing the Trump campaign's ties to the powerful gun-rights group. As recently as about a month ago, Mueller's investigators were still raising questions about the relationship between the campaign and the gun group, CNN has learned.

A spokesman for the special counsel's office declined to comment.

The NRA did not respond to a request for comment.

President Trump was not asked about his connection with the NRA in the written questions Mueller posed to him, according to a source familiar with the questions.

The NRA had already come under scrutiny from lawmakers for its massive spending in support of Trump in 2016 and its ties to Russian nationals.

Maria Butina, a Russian national, pleaded guilty in DC federal court in December to engaging in a conspiracy against the US. As part of her plea, she acknowledged that she attempted to infiltrate GOP political circles and influence US relations with Russia, in part by building ties with prominent members of the NRA.

She also admitted she was working at the direction of a prominent former Russian central banker, Alexander Torshin, who was sanctioned by the US Treasury Department last year for his role in the Russian government. Torshin is also a lifetime member of the NRA.

Law enforcement has not accused the NRA of any wrongdoing.

Oregon Sen. Ron Wyden, the top Democrat on the Senate Finance Committee, is among the lawmakers who has pressed the NRA for more information, particularly about its finances.

In letters to Wyden, the NRA revealed it had received contributions from more than 20 Russian nationals in the US or people associated with Russian addresses since 2015. But the donations amounted to a little more than $2,500, according to the NRA's letter. The group also insisted it did not use foreign funds for election-related purposes.

Under the GOP-led House Intelligence Committee last year, Democrats complained that Republicans were thwarting their efforts to investigate whether Russia used the NRA as part of its broader influence operations. It's unclear how Democrats might proceed now that they control the committee.

Until now, though, it had been unclear whether Mueller's team had any interest in digging into the Trump campaign's dealings with the NRA.