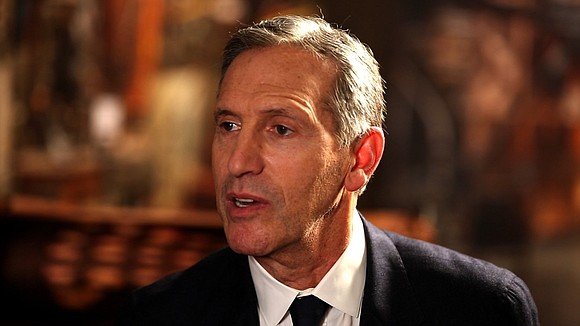 (CNN) -- Bill Burton, a former adviser to President Barack Obama, defended his decision to join Howard Schultz's team as the former Starbucks CEO considers an independent presidential bid in 2020, pushing back against suggestions that Schultz could be a spoiler.

Burton was one of the original aides to the Obama campaign 12 years ago and went on to be deputy press secretary in the White House. His addition to Schultz's team will lend the former Starbucks CEO credibility but it will also amplify the pushback to Schultz's potential bid from Democrats who believe it would jeopardize their chances at defeating President Donald Trump.

"Bill Burton has left the firm to pursue projects he could not have pursued or participated in at SKDK," said a spokesperson for the group. "We wish him well."

In a more direct email to employees, SKDKnickerbocker managing director Josh Isay wrote, "Bill no longer works at SKDK and we will have nothing to do with this effort. We wish Bill well personally but all this firm cares about is beating Donald Trump.

"To be clear, will stand up against anything or anyone that gets in the way of putting a Democrat in the White House."

In a phone interview with CNN on Monday night, Burton defended his decision to join Schultz's team, saying: "The criticism of this effort right out of the box has been extraordinarily lazy."

"I don't accept the premise that any one of the front-running presidential candidates can beat Donald Trump," Burton said. "If there's nothing more important than beating Donald Trump, we need to be more creative about how to do that."

"I'm doing this because I think our country is in crisis and I think we should be imaginative as for how to fix it," he added.

News of Burton joining Schultz's team quickly enraged a number of Democratic operatives who are working to beat Trump. Their argument: Schultz's entry into the 2020 race would fracture the anti-Trump vote and make it easier for the President to win re-election. Burton said Steve Schmidt, a longtime Republican strategist, was also joining the effort.

"He should know better," said a Democratic operative. "I am furious. The guy was on the ground in Iowa for Obama and now he is playing into the potential re-election of Trump."

"No amount of money would be worth this," one former Obama aide said. "This is very shortsighted of him."

Burton brushed aside the criticism, saying it's time to explore a new direction for the country.

"I'm doing this because I think our country is in crisis and I think we should be imaginative as for how to fix it," Burton said.

He disputed the suggestion that he is helping Schultz simply to make money, saying: "This is a campaign. We're not doing this as volunteers."

After Schultz announced on "60 Minutes" on Sunday that he was "seriously considering" running for president as a "centrist independent" in 2020, Democrats from across the political spectrum reacted with a near universal negativity.

News of Schultz's 2020 aspiration came at the outset of a book tour for "From the Ground Up," the coffee magnate's memoir. But at his first book tour event on Monday, the animosity some have towards a Schultz run was readily apparent.

"Don't help elect Trump, you egotistical billionaire ahole," yelled a protester at the start of the event at a Barnes & Noble in New York City. "Go back to getting ratioe'd on Twitter. Go back to Davos with the billionaire elites who think they know how to run the world. That's not what democracy is."

Burton, who was at the event and saw the heckler, said Schultz "took it in stride."

The United States has a long history of independent candidates running for president, but few have ever come close to winning, especially in recent years as Democrats and Republicans have dominated the two-party system. Ross Perot ran as an independent in 1992, winning close to 20 million votes but no votes in the Electoral College.

Their biggest impact is the sense that third party candidates play the role of spoiler. Some Republicans believe Perot cost former President George H.W. Bush the presidency in 1992 by making President Bill Clinton's path to the White House easier. On the other side of the aisle, some Democrats believe Ralph Nader, who ran as an independent in 2000, cost Al Gore the presidency because his 97,488 votes in Florida helped President George W. Bush beat the former vice president in the decisive state by 537 votes.

Burton himself has mused about the damage a third-party candidate can have on the Democratic nominee.

In an August 2016 op-ed in The Sacramento Bee, Burton urged voters to be wary of third-party candidates because "a Trump presidency would mean the dismantling of basically every important progressive achievement over the last century, and progressives need to keep that in mind."

"If Stein or Libertarian candidate Gary Johnson eat into Clinton's support even a little, that could matter in a close election," he wrote. "And in the same way I would bet that Ralph Nader -- or at least many of his supporters -- wishes that he didn't help to make George W. Bush our 43rd commander in chief, I suppose Stein supporters would not want to be in the position of explaining to their kids how they helped make Trump president."