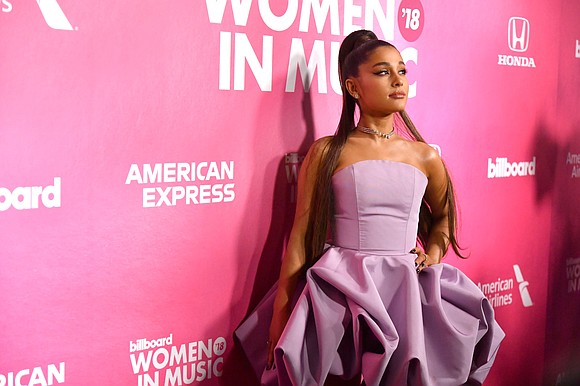 Just one year ago, Ariana Grande was falling in love with comedian Pete Davidson. A few months later, she'd be mourning the loss of her former boyfriend, rapper Mac Miller, and dealing with PTSD from a terror attack at her 2017 Manchester concert that killed 22 people and injured hundreds./CREDIT: Mike Coppola/Getty Images for Billboard Source: Getty Images for Billboard

(CNN) -- Just one year ago, Ariana Grande was falling in love with comedian Pete Davidson. A few months later, she'd be mourning the loss of her former boyfriend, rapper Mac Miller, and dealing with PTSD from a terror attack at her 2017 Manchester concert that killed 22 people and injured hundreds.

Of the time following the attack and Miller's death, Grande told Vogue in a cover interview: "I was researching healing and PTSD and talking to therapists, and everyone was like, 'You need a routine, a schedule,' ... Of course because I'm an extremist, I'm like, OK, I'll go on tour! But it's hard to sing songs that are about wounds that are so fresh. It's fun, it's pop music, and I'm not trying to make it sound like anything that it's not, but these songs to me really do represent some heavy st."

Grande shed tears during the interview when she spoke of missing Miller and explained how her performances at Coachella in April helped remind her of him, in a good way. (Miller died of an accidental overdose in September 2018.)

"I was always a person who never went to festivals and never went out and had fun like that. But the first time I went was to see Malcolm perform, and it was such an incredible experience," Grande explained. "I went the second year as well, and I associate, heavily ... it was just kind of a mindfk, processing how much has happened in such a brief period."

She says in November 2018, after Miller's death and her breakup with Davidson, she realized she needed help.

"I'm a person who's been through a lot and doesn't know what to say about any of it to myself, let alone the world. I see myself onstage as this perfectly polished, great-at-my-job entertainer, and then in situations like this I'm just this little basket-case puddle of figuring it out," she said.

"I have to be the luckiest girl in the world, and the unluckiest, for sure. I'm walking this fine line between healing myself and not letting the things that I've gone through be picked at before I'm ready, and also celebrating the beautiful things that have happened in my life and not feeling scared that they'll be taken away from me because trauma tells me that they will be."

With Miller, she said his addiction became too heavy to handle. She was constantly consumed with worry and would often track him to make sure he wasn't on a bender.

"People don't see any of the real stuff that happens, so they are loud about what they think happened," she said. "They didn't see the years of work and fighting and trying, or the love and exhaustion."

Her time with Davidson felt different.

"My friends were like, 'Come! We're gonna have a fun summer [in New York.]' And then I met Pete, and it was an amazing distraction. It was frivolous and fun and insane and highly unrealistic, and I loved him, and I didn't know him. I'm like an infant when it comes to real life and this old soul, been-around-the-block-a-million-times artist. I still don't trust myself with the life stuff."