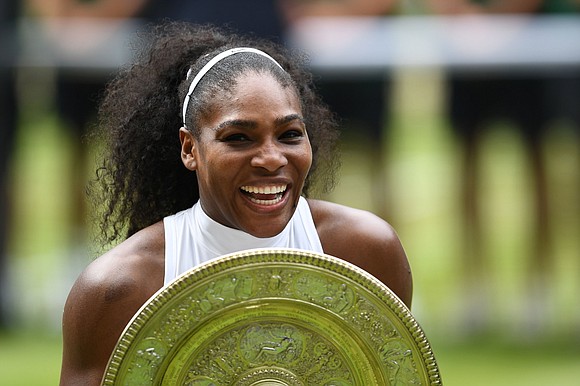 Williams won the last of her seven Wimbledon titles in 2016, but after giving birth two years ago and overcoming a knee injury this season, she looks in ominous form once again.

She will play Barbora Strycova in the last four after the Czech beat Briton's Johanna Konta 7-6 (7-5) 6-1.

"I believe in myself," Williams told reporters.

"I believe if I'm feeling well, I can be a big competitor in a sport that I love and I've done so well at. So just the key word is getting fit and getting back into match play injury-free.

"So now that I am, I can actually start to play tennis. That has been literally something that I have not been able to do all year."

Former world No.1 Simona Halep fought back from 4-1 down in the first set against against China's Zhang Shuai before triumphing 7-6 6-1.

In the other quarterfinal, Elina Svitolina, seeded eight, became the first Ukrainian woman to reach a grand slam semifinal with a 7-5 6-4 victory against Czech Karolina Muchova.

Williams had lost just two Wimbledon quarter finals -- in 2001 and 2007 -- in her 13 appearances in the last eight, but the 29-year-old Riske was determined not to gift her anything.

The world No.55 grabbed the first break of serve for 3-1 but then lost her own serve as Williams leveled 3-3 courtesy of some luck with a net cord which left the scrambling Riske out of position and the court wide open.

But Riske's forehand was firing, and she broke Williams immediately, only for her compatriot to break again for 4-4.

By now Williams had shaken off the early rust and held her own serve before closing out the set with a fist in the air, watched on by golf great Jack Nicklaus among other celebrities and sports stars in the royal box.

The second set went with serve until 4-4 when Riske grabbed a decisive break to get to 5-4 and served out for the set, crying out "Yesss!"

Williams, who received more strapping to her right ankle towards the end of the second set, sensed she was in a serious battle but got her nose in front early in the third set before the increasingly accomplished Riske broke straight back for 3-2.

Williams had several break points in a roller-coaster eighth game and eventually clinched the break when Riske double faulted.

The veteran served out the match with an ace down the middle and thrust her arms in the air before congratulating a worthy opponent at the net to huge cheers from the capacity crowd.

Williams will also team up with two-time Wimbledon men's singles champion Andy Murray back out on Centre Court for their mixed doubles second-round match against Fabrice Martin and Raquel Atawo.