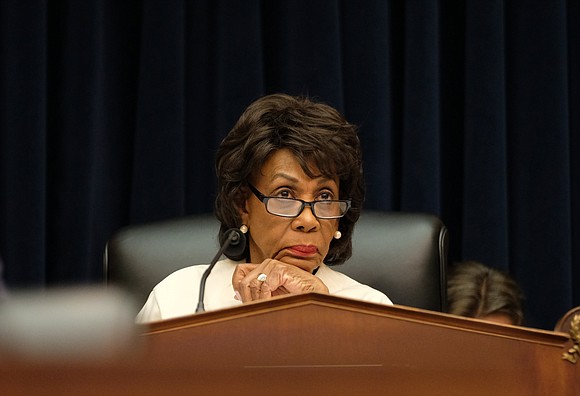 The proposal, still just a discussion draft, is titled the "Keep Big Tech Out of Finance Act." It details rules that would prohibit large internet platforms from becoming financial institutions or offering cryptocurrencies.

The draft will be a topic at a House Financial Services committee hearing on Wednesday about Facebook's plan to launch a digital currency called Libra. Waters chairs that committee. The Senate Banking Committee will take up Libra on Tuesday.

The proposed legislation would affect more than Facebook. It would prohibit all large internet companies from affiliating with or becoming financial institutions — including domestic or foreign banks, credit unions and depository institutions, among others. The prohibition would go into effect one year after the bill's passage.

The draft bill was circulated by Waters' committee staff. Waters has loudly opposed Facebook's Libra since it was announced last month. Facebook says Libra will be a digital currency managed by an independent association in Switzerland that could speed up online payments and improve financial inclusion. Libra is expected to launch in early 2020.

The Libra announcement, and Facebook's plans to offer a digital wallet and other financial services for Libra users, sparked worries that the company wants to become a bank without being regulated like one. President Donald Trump tweeted last week that Facebook would need to "seek a new Banking Charter and become subject to all Banking Regulations, just like other Banks," if it wants to offer financial services.

One major question concerning the project has been which US regulatory agency would oversee Libra. Its proposed governing body, the Libra Association, and related products from Facebook would also need federal oversight. The drafted bill lays out the various banking regulatory agencies that would be responsible for enforcing the legislation.

The proposed legislation would also bar Big Tech companies from developing cryptocurrencies. The bill would apply to any technology company with an annual global revenue of $25 billion or more whose primary business is operating an online public marketplace, an exchange, or a platform for connecting third parties. That would apply to Facebook, Google, Amazon, and potentially Apple and Microsoft.

The bill would not ban digital currencies from existing financial institutions, such as the digital coin introduced by JP Morgan earlier this year.

Violators would be subject to a fine of "not more than" $1 million per day, according to the drafted bill.

The proposed legislation has not been formally introduced, and thus it does not yet have any sponsors. But Waters and other Committee Democrats have asked Facebook to place Libra's development on hold to give to lawmakers the chance to consider regulatory action."

The Facebook executive testifying at this week's congressional hearings, David Marcus, said in his prepared remarks released Monday that Facebook will not launch Libra until it receives the proper regulatory approval. The company says it has met with regulators and will work with lawmakers on guidelines for Libra.