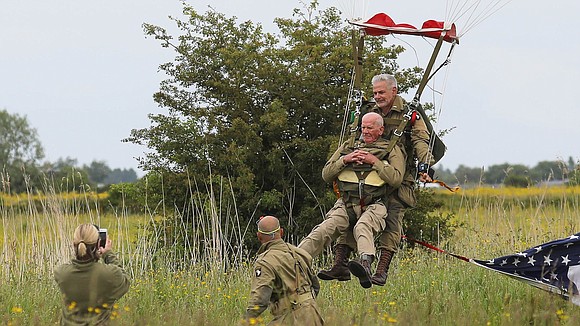 For most people, a summer trip to France is a chance to relax in beautiful surroundings and to savor the country's fine food. For Tom Rice of San Diego, it's an opportunity to relive the time he nearly died jumping from a C-47 Douglas airplane, then was shot at, again and again.

(CNN) -- For most people, a summer trip to France is a chance to relax in beautiful surroundings and to savor the country's fine food. For Tom Rice of San Diego, it's an opportunity to relive the time he nearly died jumping from a C-47 Douglas airplane, then was shot at, again and again.

Despite being 97, Rice climbed once more into the bone-rattling fuselage of a C-47 and, while flying over the Normandy fields where he first saw action in 1944, leaped into the unknown.

Those on the ground watched the anxiety-inducing descent as, strapped to another parachutist dangling beneath a red, white and blue canopy, the old man coasted through the sky, another gigantic American flag billowing out behind him.

Reaching the ground with only a slight stumble on impact, Rice proudly gave V for victory signs with his hands and, wearing a 101st Airborne baseball cap, said he felt "great" and was ready to "go back up and do it again."

Rice, along with thousands of others, was in Normandy to mark the anniversary of the June 6 D-Day military operations that 75 years ago saw Allied forces turn the tide of World War II toward eventual defeat for Nazi Germany.

Most participants were content with touring some of the broad landing beaches -- with code names like Juno, Gold and Omaha -- that saw legions of young men wade ashore into a barrage of German machine gun and artillery fire to push back German advances.

But Rice, who has recreated his Normandy parachute jump several times, was adamant the best way to pay tribute to the fellow soldiers who laid down their lives that day is to step back into the shoes of his younger self and take to the skies.

He was among several hundred parachutists recreating the events of June 6, 1944, many using simple parachutes similar to those used 75 years ago.

Despite the intervening years, Rice clearly recalls his experiences when, as a 22-year-old member of the US Army's 101st Airborne Division's 501st Parachute Infantry Regiment, he was dropped into enemy territory to capture strategic infrastructure to safeguard the beach invasion.

Barely briefed on his mission and burdened down with equipment, Rice was first in line to leap from the aircraft when everything started to go wrong.

"I was thinking, 'let's get the hell out of here,' because we were under fire," he told CNN. "All the thoughts about what we're going to do, how we're going to do it just passed through my mind so quickly and I was so focused on getting out of that aircraft."

Unfortunately for Rice, to avoid enemy gunfire the C-47's pilot had accelerated to 165 miles per hour, beyond the safe drop speed of 105 mph, and refused to slow down. When Rice came to jump, the force of the airspeed caused his arm to get trapped in the doorway.