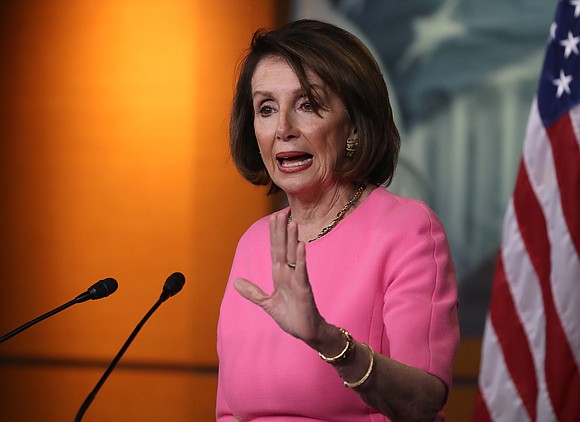 House Speaker Nancy Pelosi told Democrats pushing for an impeachment effort that rather than wanting to see President Donald Trump impeached, she wanted to see him "in prison," Politico reported.

(CNN) -- House Speaker Nancy Pelosi told Democrats pushing for an impeachment effort that rather than wanting to see President Donald Trump impeached, she wanted to see him "in prison," Politico reported.

According to the report, Pelosi made the remark at a meeting on Tuesday night as House Judiciary Chairman Jerry Nadler asked to be able to begin an impeachment inquiry.

Ashley Etienne, a spokeswoman for Pelosi, said she could not confirm the comment.

Pelosi has previously accused Trump of engaging in a "cover-up" over special counsel Robert Mueller's investigation into Russian interference in the 2016 election, but her reported remarks are an escalation from her public rhetoric. Last month, she said, "we believe that no one is above the law, including the president of the United States."

She has repeatedly rebuffed Democrats' desires to begin an impeachment inquiry, saying the issue is "divisive" and instead calling for Democrats to continue investigating Trump. On Wednesday, she said she was "not feeling any pressure" on the matter as more Democrats in the House and on the campaign trail have called for impeachment.

Meanwhile, Nadler -- who heads the committee that would begin possible impeachment proceedings -- would not say in a Wednesday interview on CNN whether he was in agreement with Pelosi. He said it "may come to" opening the process of impeachment but referred at the same time to their continuing investigative efforts.

"As I said, we are launching an inquiry now, and whether we'll launch an impeachment inquiry, it may come to that," Nadler said.

Several House committees have targeted Trump for investigation, and Democrats have been in ongoing conflict with the administration over its refusals to submit documents and testimony.