Trump hails D-Day veterans as 'among the very greatest Americans' 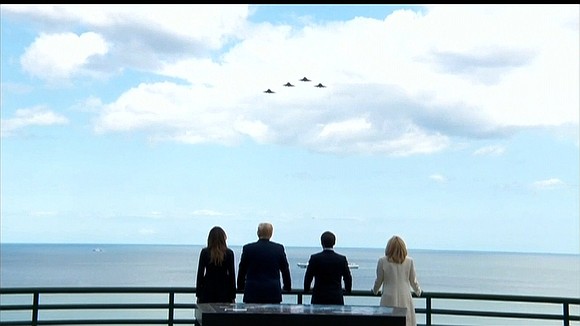 It included an assortment of US cargo planes, including the C-47 and C-130, as well as four F-15 Eagle fighters.

(CNN) -- Weaving a harrowing narrative of the mission to storm the Normandy shore in an attempt to retake Europe from the Nazis, President Donald Trump on Thursday hailed D-Day veterans as "among the very greatest Americans who will ever live."

In a speech laced with individual stories of extraordinary heroism and loss, framed by the aging faces of those who experienced it, Trump memorialized an event that changed the course of the war.

Embracing frail veterans making what could be their final journey to the windswept bluffs where they made history, the President appeared genuinely moved by the weight of what had happened there.

And he buttressed an alliance system that emerged from the violence, despite having in the past questioned some of the institutions forged from the bloodshed.

"You are the glory of our republic and we thank you from the bottom of our hearts," Trump said in remarks at the Normandy American Cemetery in northern France.

"These men enlisted their lives in a great crusade, one of the greatest of all times," he said. "Their mission is the story of an epic battle and the ferocious eternal struggle between good and evil."

Speaking after his French counterpart Emmanuel Macron, Trump said the country's debt to the veterans who participated in the landings was "everlasting."

Trump is the latest in a string of presidents to mark the anniversary of D-Day in France, each successive ceremony seeing fewer and fewer of the veterans who carried out the harrowing mission make it back to the blustery cliffs and stretches of sand.

Now in their 90s, and of a thinning generation with first-hand memory of the war, those veterans joined Trump and other world leaders to mark the occasion near the American cemetery at Colleville-sur-Mer.

Trump singled out Russell Pickett, the last known survivor of Company A, among the first waves of American infantrymen who landed on Omaha Beach.

In his Army cap and standing with the help of a cane, Pickett rose to embrace the President after Trump recounted his story.

Later, Trump sits for talks with Macron before departing for his golf course in Ireland, where he is spending two nights.

In his speech, Trump said the commemoration ceremonies on the cliffs and beaches of Normandy were meant to honor the men -- many just teenagers -- who lost their lives there.

"We come not only because of what they did here, we come because of who they were. They were young men with their entire lives before them," Trump said.

Born a year after the fighting ended, Trump is a beneficiary of the post-war prosperity those veterans' gallantry helped provide. And while Trump this week has already hailed the heroism of the Allied forces, he also downplayed the very notion of obligatory military service, saying his own avoidance of the Vietnam War was because he "was not a fan of that war."