What happened during the Normandy landings? 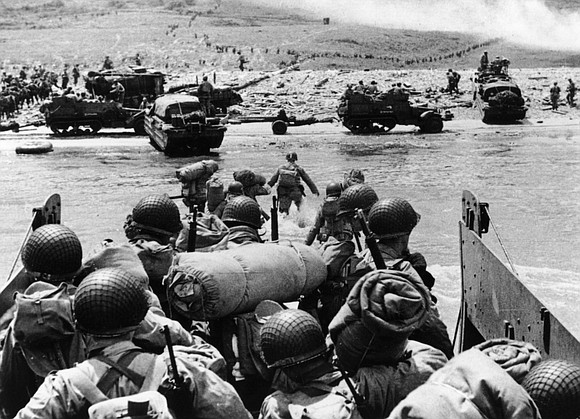 The D-Day allied invasion of Normandy began with paratroopers and soldiers coasting through the air on gliders in the darkness of the early morning hours. And a full moon lit the way.

(CNN) -- Donald Trump joined Queen Elizabeth II and 15 other heads of state in the British city of Portsmouth Wednesday to commemorate the 75th anniversary of D-Day; the largest joint military operation ever undertaken.

World leaders, royalty and veterans gathered at the Portsmouth Naval Memorial to mark the Normandy landings, which were the starting point for the liberation of Nazi-occupied Europe during World War II.

The commemoration, which was also attended by more than 300 veterans, included an hour-long production explaining the events of D-Day, including theatrical performances, and a fly-past by Spitfires and the Red Arrows aerobatics display team.

Trump and UK Prime Minister Theresa May were joined by the leaders of France, Germany, Canada, Australia, New Zealand, Belgium, the Czech Republic, Greece, Luxembourg, the Netherlands, Norway, Poland, Slovakia and Denmark at the event.

The Queen and May addressed the crowd, and May read from a letter written by Capt. Norman Skinner, of the Royal Army Service Corps, to his wife in 1944 just days before he was killed during the D-Day landings.

"My darling this is a very difficult letter for me to write. As you know something may happen at any moment and I cannot tell when you will receive this," May read. "You and I have had some lovely years which now seemed to have passed at lightning speed.

"My thoughts at this moment, in this lovely Saturday afternoon, are with you all now. I can imagine you in the garden having tea with Janey and Anne getting ready to put them to bed."

D-Day -- the military term for the first day of the Normandy landings -- was the largest amphibious invasion ever undertaken and laid the foundations for the Allied defeat of Germany in World War II.

The invasion took place on June 6, 1944, and saw of tens of thousands of troops from the United States, the UK, France and Canada landing on five stretches of the Normandy coastline -- codenamed Utah, Omaha, Gold, Juno and Sword beaches.

Planning for D-Day began more than a year in advance, and the Allies carried out substantial military deception -- codenamed Operation Bodyguard -- to confuse the Germans as to when and where the invasion would take place.

The operation was originally scheduled to begin on June 5, when a full moon and low tides were expected to coincide with good weather, but storms forced a 24-hour delay.

What happened on D-Day?

Deception tactics employed in the months leading up to the attack led the Germans to believe that the initial attacks were merely a diversion and that the true invasion would take place further along the coast.

Allied divisions began landing on the five beaches at 06.30 on June 6.

The US troops were assigned to Utah beach at the base of the Cotentin Peninsular and Omaha beach at the northern end of the Normandy coast. The British subsequently landed on Gold Beach, followed by the Canadians at Juno, and finally the British at Sword, the easternmost point of the invasion.