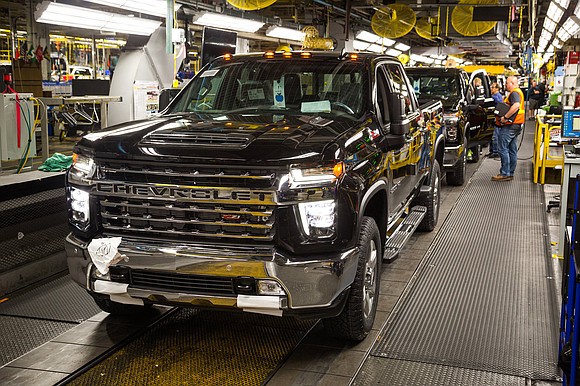 A Chevrolet Silverado full-size pickup truck is ready to roll off the assembly line Wednesday, June 12, 2019 at the General Motors Flint Assembly Plant in Flint, Michigan. GM announced today it will invest $150 million at the plant to increase production of the all-new Chevrolet Silverado and GMC Sierra heavy-duty pickups, which begin shipping to dealers this week. (Photo by Jeffrey Sauger for General Motors)

GM has invested more than $1.6 billion in the Flint Assembly since 2013, enabling an increase in the truck plant’s production capacity of the all-new Chevrolet and GMC HD pickups by about 40,000 vehicles annually, including more crew cab models and diesels.

Additionally, 1,000 new jobs were created this year, bringing employment at the plant to more than 5,000. The new investment will enhance the plant’s conveyors and other tooling to increase production capacity. The work will be completed in the first half of 2020.

“We have tremendous opportunities to grow our heavy-duty pickup business, because we’ve invested in capability, performance, innovation and capacity,” said Mark Reuss, GM president. “Our all-new Chevrolet and GMC HD pickups are the toughest, strongest, most capable heavy-duty pickups we’ve ever brought to market, and our Flint team is up to the challenge to build world-class quality products to drive the growth.”

GM’s full-size truck product offensive began last year with the launch of the all-new Chevrolet Silverado and GMC Sierra 1500 light-duty crew cabs built at the Fort Wayne truck plant. Double cab and regular cab models are now available as well. Combined sales of the all-new 2019 Chevrolet Silverado 1500 and GMC Sierra 1500 crew cab pickups, the highest volume model in the fiercely competitive full-size pickup segment, were up 20 percent in the first quarter of 2019 versus a year ago. GM is projecting another significant increase for the second quarter.

Dealers will build their inventories of the new heavy-duty pickups through the remainder of 2019.

The Flint and Fort Wayne investments are the most recent GM has made to strengthen its growing truck, SUV and crossover business. Other investments include those previously announced in Dayton, Ohio; Parma, Ohio; Romulus, Michigan; Toledo, Ohio; Spring Hill, Tennessee; and Lansing, Michigan.

Since 2009, GM has invested more than $23 billion in its U.S. manufacturing base – more than one-quarter of every dollar spent by any automaker.