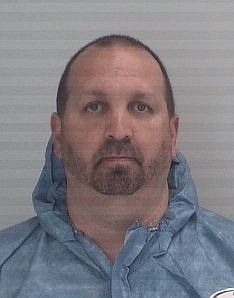 Craig Stephen Hicks, 46, has been charged with murder in the shooting death of Deah Shaddy Barakat, 23; Yusor Mohammad, 21; and Razan Mohammad Abu-Salha, 19; three Muslim students at University of North Carolina Chapel Hill. Hicks turned himself into police shortly after the attacks on Feb. 10, 2015.

(CNN) -- A North Carolina man was sentenced Wednesday to three terms of life in prison for shooting and killing three of his neighbors, all Muslim students, in the college town of Chapel Hill in 2015.

He also pleaded guilty to discharging a firearm into an occupied dwelling, for which he was sentenced to an additional 64 to 89 months.

Police said Hicks shot the three in February 2015 at an apartment near the University of North Carolina at Chapel Hill. Police said the shooting appeared to stem from a parking dispute.

Hicks was not charged with a hate crime. That incensed the victims' relatives, who alleged that Hicks had taunted the victims previously, and who did not accept that Hicks shot them only over a parking space.

During Wednesday's court proceeding, Hicks said he was not satisfied with his attorneys, because he wanted to plead guilty long ago.

"I wanted to plead guilty on day one ..., " Hicks said. "Here it is, four years, four months and two days later, and I'm finally here."

Barakat, 23, was a second-year student at the UNC dental school. Yusor Mohammad, 21, was preparing to follow in her husband's footsteps at the dental school and had just received her letter of admission.

Her sister Razan, 19, was an aspiring student of design and architecture.

Hicks, who had turned himself in to police on the night of the killings, was 46 at the time.