Soy Milk vs. Almond Milk: Which One Is Really Better For You? 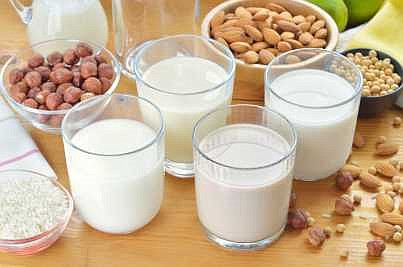 There has been an ongoing debate as to which is better or healthier, soy milk or almond milk. Studies have shown that cow’s milk is still the most complete and balanced source of protein, fats and carbohydrates but soy milk has come out on top when comparing the nutritional profiles of soy milk, almond milk and other plant-based milks. It was found to be the most comparable to cow’s milk in terms of overall nutrient balance. There are several differences. Let’s break it down:

Soy milk contains more protein than almond milk. It has more heart healthy polyunsaturated fats or healthy fats as compared to saturated fats (these fats can cause high cholesterol and heart problems). It has less sodium than almond milk and both milks are lactose free. It is the only vegan dairy alternative that offers a similar amount of protein as cow’s milk.

The nutrient content is also comparable to that of cow’s milk. It is cholesterol free and contains phytonutrients known as isoflavones (a colorless, crystalline, bioactive ketone which are antioxidants and can reduce inflammation in the body), which have been shown to have cancer-fighting properties. Soy protein may help reduce LDL or “bad” cholesterol.

There is also concern about “anti-nutrient” substances naturally found in soy called phytic acid, which can make it harder for the body to absorb and digest certain vitamins and minerals.

Almond milk is lower in calories than soy milk and contains more heart healthy monounsaturated fats, which may help with weight loss and weight management and has also been shown to reduce LDL cholesterol.

Almond milk has more sodium than soy milk and contains less protein. If replacing cow’s milk with almond milk, the calories, protein and vitamins should be made up from other food sources. Both are vegan and low cholesterol. These two plant-based milk options are the most popular.

There are different brands of almond milk and soy milk in which the nutrient content differs. When comparing the two, some have added sugar, salt and preservatives. These additions may change the carbohydrate content and the calories in the milk. Most brands of plant-based milk will have added calcium and vitamin D to mimic cow’s milk.

Some brands of soy milk are lacking an essential amino acid called methionine due to the process manufacturers use to make soy milk. As a result, people may need to get it from other areas of their diet.

Why do people seek alternatives to begin with? For one, dairy is one of the most common allergens among infants and children. Raw milk has been linked to outbreaks of salmonella and E. coli. There’s also the issue of lactose intolerance in which plant-based milk might be a better alternative.

Almond milk and soy milk can replace a glass of cow’s milk. It can be used in your coffee or in your favorite cereal, protein shakes, coffee, tea, etc. but keep in mind it is not a complete replacement for cow’s milk. You will still need to make up the loss of calories, protein and vitamins from other sources.