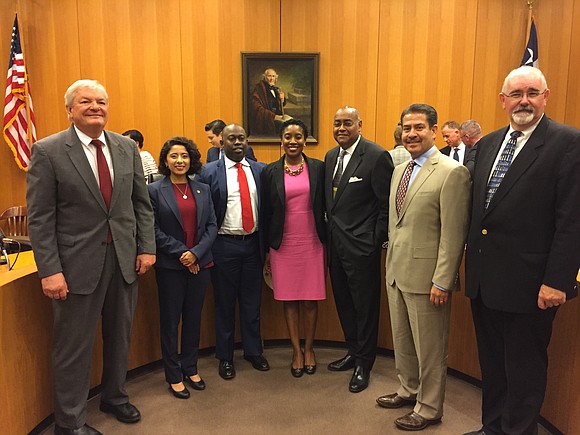 Genesis E. Draper, center, takes photo with Harris County Commissioners Court on Tuesday shortly after she was appointed to succeed the late County Court at Law No. 12 Judge Cassandra Hollemon.

The seat was left vacant following the unexpected passing of Judge Cassandra Hollemon, who was elected to the bench in November as part of a historical judicial sweep that elected 17 Black women to the county judiciary, all of whom demonstrated a deep commitment to criminal justice reform. During her short time on the bench, Judge Hollemon was a part of the historical decision by the County Criminal Court judges to implement local rule changes for misdemeanor bail protocols, effectively ushering in long-awaited bail reform.

“We can never replace Judge Hollemon, but we can honor her legacy and the will of the voters by appointing Genesis E. Draper to the bench,” said Commissioner Ellis. “Ms. Draper has an exemplary legal career and record of public service that reflects a clear commitment to ensuring everyone receives fair treatment and equal justice in Harris County regardless of who they are or how much money they have.”

After Commissioners Court, Draper said: “This appointment is a tremendous honor. I’m committed to building on Judge Hollemon’s legacy and will continue her work, alongside other members of the Harris County judiciary, to advance the reforms that are needed to transform our justice system into one that delivers equal justice and fair treatment to all people.”

Draper is a graduate of Spelman College and received her law degree from the University of Texas Law School, where she was a member of the Thurgood Marshall Legal Society, Criminal Law Society, Board of Advocates and the mock trial team.

“Ms. Draper has a thorough understanding of criminal court proceedings and the Constitution. She also knows firsthand how the racial and economic disparities found throughout the system undermine justice,” Commissioner Ellis said. “I am confident that her appointment to the bench will serve the people of Harris County and help transform our criminal justice system into one that is more fair and just for all people.”