The city trying to make better bagels than NYC 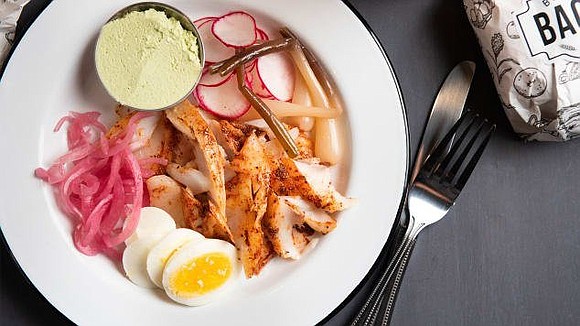 Despite the name, Button & Co. Bagels serves other breakfast items like eggs.

(CNN) -- A search for the best pulled pork barbecue or biscuits and gravy are fine reasons to hop a flight to North Carolina, but if you're looking for a great New York-style bagel? Bless your heart.

That is, until recently, as an influx of Northern-bred residents has led to some legitimate contenders in the bagel landscape.

"We really want our bagels to have a sense of place. That's really important," Button, a two-time James Beard Award finalist and the executive chef at Cúrate in Asheville, tells CNN Travel.

While Button's bagels will follow a process similar to New York-style bagels — a sourdough starter, boiled, then baked — many of the ingredients are specific to the region, starting with sorghum syrup, made from a grass that grows in North Carolina, instead of a more typical barley malt syrup used in a New York bagel's dough and boil.

The syrup is found more prominently in the shop's fig and sorghum bagel, a seasonal flavor that's their take on cinnamon raisin, which Button noted most shops offer as their sweet flavor option.

"I started thinking, why? It doesn't have to be cinnamon raisin, it could literally be anything," she said. "Figs grow around here. It just felt like it made sense for where we are."

But there's one ingredient that can't be all local. In her research and recipe testing, Button found that there's a reason the South has always been more about biscuits than bagels — and it has nothing to do with the tap water in New York.

"It actually has to do with the wheat that grows well in the South," she said, explaining that spring wheat grown in the North has the high gluten quantity necessary for the chewy texture bagels are known for. To get the right bite, the shop will blend flour from Asheville-based Carolina Ground with an organic northern wheat flour.

Button said she saw the bagel shop as filling a void in the Asheville market, but it also offers a bit of nostalgia for the chef, who was born in South Carolina but raised in New Jersey.

"We just always think about what's missing. If I wanted to eat out in Asheville, what am I missing in the food scene here that was something I really wanted?" she said. "I'm a Southern girl who's spent a lot of time in the New York and New Jersey area, so I was desperately missing a bagel shop with smoked fish and the whole thing."

At Button & Co. Bagels, that means gravlax, pastrami and sumac-rubbed sablefish along with a variety of jams, pickles and preserves and bottled celery, root beer and strawberry soda — all made in-house. A selection of schmears comes from Three Graces Dairy in nearby Marshall., developed at Button's request.