Apple just made one of its boldest bets ever. It will have to do a lot more 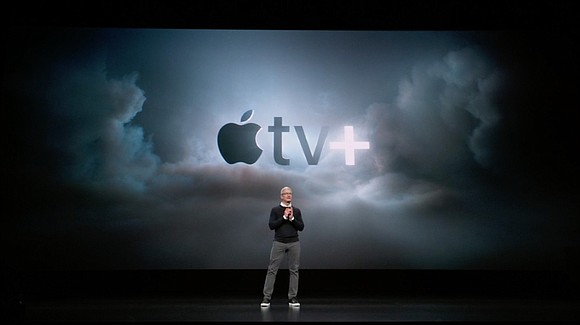 Apple will produce its own films and TV shows for a subscription service accessible on Apple devices and other streaming gadgets, including Roku

(CNN) -- Apple badly needs something to sell other than the iPhone. How badly? It just made its splashiest, most star-studded announcement ever and didn't bring up the iPhone.

Tim Cook & Co. are getting into show business. Big-name celebrities, including Steven Spielberg and Oprah Winfrey, headlined the company's much-anticipated entrance into the video-streaming market Monday. Apple will produce its own films and TV shows for a subscription service accessible on Apple devices and other streaming gadgets, including Roku. The service will be available this fall, but Apple didn't say how much it will cost.

It's among the boldest and most daring bets in the company's history. The costs of making its Apple TV+ streaming service a success will be enormous. And there's a ton of deeply entrenched competition out there.

Apple needs this to work. The iPhone accounted for nearly two-thirds of the company's revenue last year. But iPhone sales have flatlined since 2015, and fell 15% in the last quarter of 2018, when the bottom fell out of the Chinese market.

There's one problem, though: It has Netflix, Amazon, HBO Now, CBS All Access, and a gazillion other streaming services to contend with.

What Apple's up against

Netflix is far and away the biggest and most successful streaming company: It has 139 million paid subscribers, and it's available in more than 190 countries. It's still growing, too. It added nearly nine million subscribers in the last quarter of 2018.

Amazon said last year it has more than 100 million Prime subscribers, most of whom have access to the company's Prime Video streaming video service. Hulu has 25 million subscribers. (AT&T has a 10% stake in Hulu through WarnerMedia, which is also CNN's parent company.)

WarnerMedia, which already offers HBO Now, has said it will introduce another streaming service later this year. Disney is widely expected to leverage its new Fox acquisition to produce its own streaming service. And that is on top of the dozen or so "skinny bundle" streaming live television offerings from Google, Sling TV, Sony, Hulu and AT&T.

So that's what Apple's stacked up against.

"While Apple may introduce a bigger roster of original content than Amazon and Netflix during their respective launches, the streaming market has arguably already reached a level [of] saturation and consumer fatigue in the United States," said Colin Gillis, analyst at Chatham Road Partners. "Apple is late to the party."

It's not a zero-sum game: Many people subscribe to multiple services. Dan Ives, analyst at Wedbush, predicts Apple's new service will gain 100 million subscribers over the next three-to-five years.

It helps that Apple already has a huge audience — 1.4 billion active iOS devices around the world. It is also trying to differentiate itself from the competition by embracing privacy and making its content family-friendly.

And Apple isn't just relying on its existing fans: It will make Apple TV+ available to non-Apple customers, which is a huge deal.

Apple doesn't open up its walled garden often. Most notably, Apple made a Windows version of iTunes in 2003 (over Steve Jobs' objections, according to biographer Walter Isaacson). That made the iPod into an international sensation, setting up Apple for its iPhone mega-success.

How to measure success

Apple TV+ has the potential grow that services business by a lot. In a note to investors Monday, Ives said he believes Apple TV+ "will play a vital role in the services growth at [Apple] for years to come."

But streaming probably isn't a big enough business to offset the slowdown in iPhone sales on its own. Apple said most of its services growth last year came from licensing, the App Store and AppleCare — not its streaming subscriptions, like the $10-a-month Apple Music.

Gillis estimates that Apple Music has 56 million subscribers, but contributed just 10% to 15% of Apple's services revenue. That means Apple Music made up only 1% to 2% of Apple's overall revenue. Apple TV+ may not make much more of a dent.

"Apple's new video service is not going to be a Netflix killer," Gillis said. "Apple remains the iPhone company."