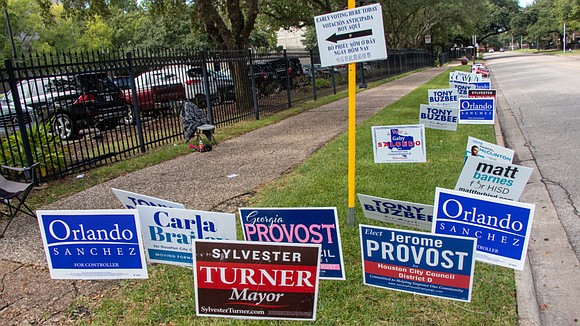 Questions remain about whether a Houston candidate with a felony conviction is eligible to be on the runoff ballot for a city council seat.

Tarsha Jackson and Cynthia Bailey were the top two vote-getters in the District B race on Election Day. Neither candidate received more than 50% of the vote, so the race went to a runoff, scheduled for December 14.

But the third-place candidate in the race, Renee Jefferson Smith, filed a lawsuit two days after the November 5 general election, asking the court to declare Bailey ineligible and prevent the city of Houston from certifying the election results because Bailey has a felony conviction on her record. In 2007, Bailey was convicted of theft and sentenced to 10 years in prison.

Jefferson Smith also argued in her lawsuit that Bailey “may have perjured herself by falsely asserting on her affidavit for public office that she was not an ex-felon.” As part of the City of Houston’s application form, Bailey signed a sworn affidavit saying she had not been finally convicted of a felony “for which I have not been pardoned or had my full rights of citizenship restored by other official action.”

In a response filed with the court, Bailey argued that she had not committed perjury when she filed the application, “based on me completing my sentence and having my voting rights restored.”

A judge denied the suit last week, clearing the way for Bailey to be on the ballot, but Jefferson Smith appealed the decision and filed a new lawsuit Friday asking the court to order a new election.

“If Ms. Bailey wins, she can’t be seated,” Jefferson Smith’s attorney, Nicole Bates, said. “What ultimately ends up happening is the state ends up stepping in and they’re going to order a whole new election. They’ll have to order a special election because she won’t be able to be seated. And if the City does try to seat her, the state will remove her.”

State law on whether a felon can run for office is open to interpretation, according to experts and lawmakers. A 2018 race for Austin City Councilreignited confusion about the state law when Lewis Conway Jr., a candidate with a felony conviction, was allowed to be on the ballot. He did not win his race.

According to current state law, “a person must have not been finally convicted of a felony from which the person has not been pardoned or otherwise released from the resulting disabilities.”

Republican State Senator Pat Fallon filed a bill during the 2019 legislative session that would have modified this part of the election code.

“The resulting disabilities line is unclear, and without legal precedent, causing confusion as to who is exactly eligible to run for public office,” Fallon said in a hearing on the bill. “SB 466 strikes this ambiguous part of the election code to make it clear that only convicted felons who have been pardoned are eligible to run for office.”

The Senate passed the bill, but it later died in the House.

A hearing in the District B case could be scheduled for later this week, according to Jefferson Smith’s attorney. Early voting in the runoff election begins November 27.