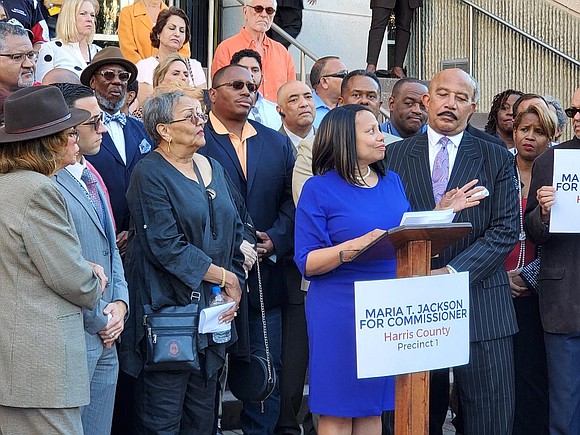 Standing on the steps of the Harris County Courthouse and surrounded by more than 60 friends, family and supporters, Judge Maria T. Jackson today kicked off her campaign to be the next commissioner for Harris County Precinct 1.

“I ask you to look around,” said Judge Jackson. “This looks like Harris County. I embrace our diversity, our thoughts, cultures and needs. Precinct 1 is where I was born and raised, and I have been serving this community for 30 years.”

Jackson’s supporters include family members of Commissioner El Franco Lee, who served Precinct 1 for many years up until his death in 2016. She also enjoys the backing of the current and former presidents of the Houston Police Officers Union and many others in local law enforcement. She is a former teacher and one of the founders of the first YES Academy, which began in Sunnyside. She presided over the 339th felony state district court for the last 11 years. Prior to that, she served for five years as a municipal court judge for the City of Houston.

“I am running because Harris County is at a crossroads,” said Jackson. “I have seen up close and personal what is happening with the current administration. Precinct 1 is drowning due to a lack of leadership. I am committed to public service. I know I can make a difference for our community. We deserve better and I want to make that happen.”

As a senior administration judge, Jackson oversaw and managed structural reform and improvement within the criminal justice system. She has finance experience from working as a municipal bond attorney and believes her leadership and management skills can be used to achieve positive change on commissioners court.

“I took a leap of faith in stepping off the bench to invest in you,” said Jackson. “Now I ask that you invest in me to be your Harris County commissioner for Precinct 1. I promise I will represent you with honesty, integrity and fairness. I will be a commissioner for all.”