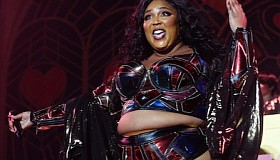 Lizzo is sharing writing credit on her hit song “Truth Hurts” with the creator behind the song’s signature line, but not with two other writers who claim they also contributed to the track.

“Truth Hurts” features the popular line, “I just took a DNA test, turns out I’m 100 percent that bitch,” which originated from a 2017 tweet by singer Mina Lioness and was turned into a popular meme. On Wednesday Lizzo wrote on social media that Lioness “is the person I am sharing my success with.”

The line was also used in Lizzo’s song “Healthy,” created in 2017 with the songwriting brothers Justin and Jeremiah Raisen. The Raisens feel they deserve writing credit on “Truth Hurts” as a result, though Lizzo wrote they “had nothing to do with the line or how I chose to sing it.”

“The men who now claim a piece of ‘Truth Hurts’ did not help me write any part of the song. There was no one in the room when I wrote ‘Truth Hurts’ except me, Ricky Reed, and my tears. That song is my life, and its words are my truth,” Lizzo wrote Wednesday.