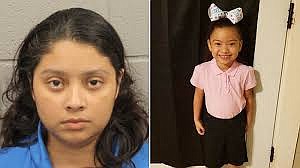 Sierra Patino and her mom

A Houston mother faced a judge Tuesday night after police say she confessed to hiding her 5-year-old's body inside an apartment closet. Detectives say 27-year-old Priscilla Nicole Torres wrapped her 5-year-old daughter, Sierra Patino, in a blanket and put her in a closet. Police say Torres told them she was too scared to call 911 after her daughter died because she feared CPS involvement. Detectives say Torres told inconsistent stories about the little girl's death. Police say at one point Torres told them her daughter suffered for days with stomach complications, but she didn't call for help for fear Childrens' Protective Services would take action. Detectives say Torres' first story to them detailed an accident with chemicals: a bottle of toilet cleaner reportedly fell in the bathtub where she was giving Sierra a bath. She claimed her daughter's face started peeling, and she died the next day.