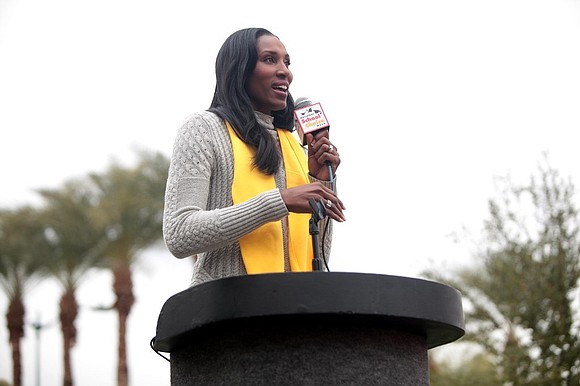 WNBA superstar and Olympic gold medalist Lisa Leslie will be the first female athlete honored with a statue outside of Staples Center in Los Angeles, CA, according to the Los Angeles Times.

Arash Markazi reported the news, writing that the Los Angeles Sparks and Anschutz Entertainment Group still have to iron out the specific date but agreed Leslie will be the 11th statue outside of the famed sports and entertainment arena. Leslie’s statue will also be the first of a WNBA player outside of a team’s home arena.

According to bleacherreport.com, Leslie went to the Sparks in the WNBA’s inaugural draft in 1997 and played her entire career with the team through 2009. During her professional basketball career, Leslie won three league MVPs, two championships, four Olympic gold medals and three All-Star Game MVPs .

Leslie, who was the first WNBA player to dunk in a game, was also named to eight All-Star teams and 12 All-WNBA teams, including eight first-team selections. In addition to her WNBA achievements, she once scored 101 points in a half during a game for Morningside High in Inglewood, and was named first-team all-conference in each of her four seasons at USC.

Leslie will now be forever memorialized alongside statues of Los Angeles legends such as Magic Johnson, Shaquille O’Neal and Kareem Abdul-Jabbar.