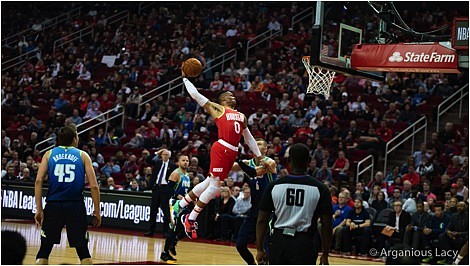 Even when he is not on the court, Houston Rockets guard Russell Westbrook is still making his presence felt in the community. Westbrook is teaming up with Comp-U-Dopt and Houston Mayor Sylvester Turner to donate 650 laptops through his WHY NOT? FOUNDATION to underprivileged children throughout the city.

Texas schools have been closed for nearly a month due to the COVID-19 pandemic which forced school districts to come up with an alternate plan to help students complete their assignments via distance learning while they are not physically able to attend classes. During the transition to the online curriculum, many teachers found out that a majority of their students did not have computers at home.

“Russell Westbrook proves why he is a champion on and off the court,” Mayor Turner said. “This donation will be a gamechanger for many students and their families coping with the impact of the COVID-19 crisis. The generous contribution from the Russell Westbrook Why Not? Foundation will help young people stay focused on their education at home and until they can return to their classroom.”

Comp-U-Dopt has provided nearly 1,000 computers to economically disadvantaged families through donations to families in Houston since March 18th. The majority of those homes have a yearly income of less than $35,000.

“The generous gift from the Russell Westbrook Why Not? Foundation will allow us to significantly increase our inventory and ensure we can to continue to close the gap for Houston families most in need,” says Colin Dempsey, Executive Director | Houston & Galveston for Comp-U-Dopt. “1 in 3 economically disadvantaged students in the Houston area lack access to a computer at home.”

Westbrook is just one of many Houston athletes doing their part in helping the city get through this current crisis. On last week, Astros third baseman Alex Bregman made a $100,000 donation to the Houston Food Bank through his FEEDHOU organization.