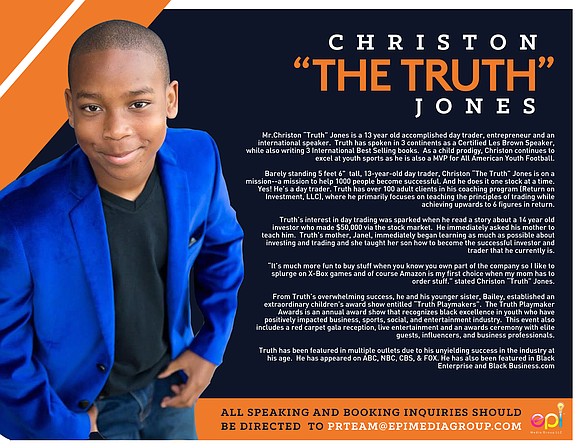 Mr.Christon “The Truth” Jones is a 13 year old accomplished day trader, entrepreneur and an international speaker. Truth has spoken in 3 continents as a Certified Les Brown Speaker, while also writing “3” international best-selling books. As a child prodigy, Truth continues to excel at youth sports as he is also an MVP for All American Youth Football.

Christon “The Truth” Jones is on a mission to help 1000 people become successful. Through his company (Return on Investment, LLC), where he primarily focuses on teaching the principles of trading while achieving upwards to 6 figures in return.

During this time of uncertainty “Truth” has counseled and coached many of his students(Median age of 30 to 50 years old) into earning $15K or more a week by trading in our current market. Truth is determined to educate the market on proper investment strategies to survive during these troubling times.

Truth has been featured in multiple outlets due to his unyielding success in the industry at his age. He has appeared on ABC, NBC, CBS, & FOX. He has also been featured in Black Enterprise and Black Business.com.