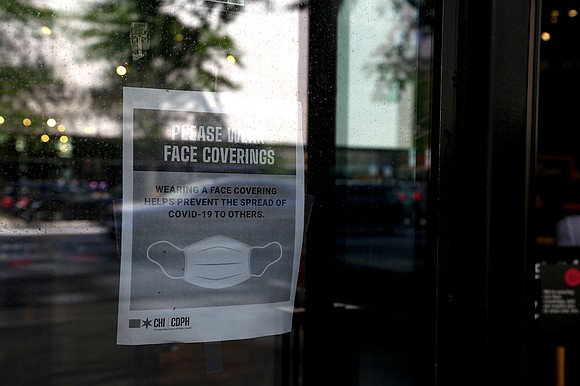 The new Illinois statute comes as disputes over mask use increase. A New Jersey woman attacked another customer at a shop after she asked her to cover her face with a mask./Credit: Olivia Obineme/Bloomberg via Getty Images

(CNN) -- Anyone who assaults an employee enforcing the use of masks can now be prosecuted as aggravated battery in Illinois.

Gov. J.B. Pritzker passed a law last week that adds a penalty for assaulting a worker who's "conveying public health guidance" -- that is, telling patrons of a business to wear a mask or maintain social distancing. In Illinois, aggravated battery is usually a felony.

The law went into effect immediately.

"This provision sends the message that it's vitally important for workers to be both respected and protected while serving on the front lines," the governor's office said in a statement on the new law.

Several states have seen disputes over mask use turn violent. In New Jersey earlier this month, a woman assaulted another customer at a Staples store who had asked her to wear her mask over her nose and mouth. Also this month, police said a Pennsylvania man shot at a cigar shop employee who'd asked him to wear a mask.

And in May, security footage showed that a man shopping at a Los Angeles Target broke the arm of a Target employee in an argument over masks.

Illinois has recorded a few incidents of worker assault, too, since Pritzker required anyone leaving the house to wear a mask back in May.

The state also debuted some punishments against businesses who fail to follow the mask mandate: Under the Illinois Department of Public Health's new emergency rules, businesses that repeatedly refuse to comply with mask requirements could incur a fine anywhere between $75 and $2,500.