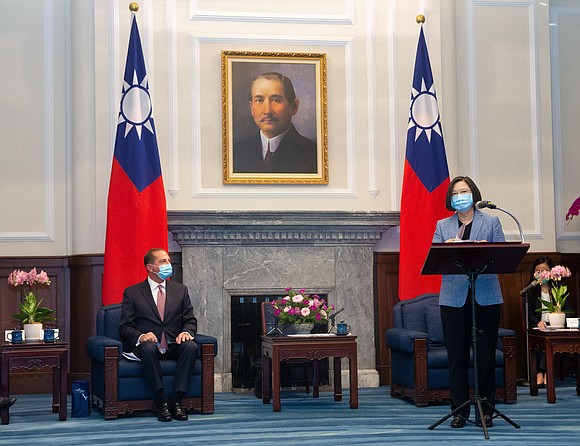 US Secretary of Health and Human Services Alex Azar (L) looks on as Taiwan's President Tsai Ing-wen (R) speaks during his visit to the Presidential Office in Taipei on August 10, 2020./Credit: PEI CHEN/AFP/POOL/AFP via Getty Images

The visit has been condemned by Beijing, which regards Taiwan as Chinese territory, and comes amid an all-time low in US-China relations.

Azar arrived in Taiwan Sunday, where he and his team were given coronavirus tests and were seen wearing face masks. The group was met by members of Taiwan's Ministry of Foreign Affairs as well as the director general of the Taiwan Centers for Disease Control and the director of the American Institute in Taiwan, the de facto US embassy.

Speaking Monday, Azar said his trip "demonstrates the robust US-Taiwan partnership on global health and health security, one of many aspects of our comprehensive friendship."

"We consider Taiwan to be a vital partner, a democratic success story, and a force for good in the world," he added.

"There are three overarching themes for this trip. The first is to recognize Taiwan as an open and democratic society, executing a highly successful and transparent COVID-19 response. The second is to reaffirm Taiwan as a long partner and friend of the United States, and to highlight our history of broad collaboration on health and public health. The third is to note that Taiwan deserves to be recognized as a global health leader with an excellent track record of contributing to international health."

Speaking alongside Azar, Tsai thanked US President Donald Trump, Secretary of State Mike Pompeo and Azar "for their continued recognition of the Taiwan model's contribution to global anti-pandemic efforts, as well as their strong support for Taiwan's international participation."

Taiwan has been widely hailed for its effective response to the coronavirus, with 480 cases and seven deaths from a population of 23 million people. That success served to highlight Taiwan's exclusion from the World Health Organization (WHO), where China has blocked its democratic neighbor from taking an observer seat.

Though the Communist Party has never controlled Taiwan, Beijing considers the island to be a sovereign part of China.

"China firmly opposes any official interactions between the US and Taiwan. This position is consistent and clear. China has made stern representations with the US side both in Beijing and in Washington," Chinese Foreign Ministry spokesman Wang Wenbin said last week.

"I want to stress that the one-China principle is universally recognized by the international community. Any attempt to ignore, deny or challenge that principle is doomed to fail."

Following the 1949 conclusion of the Chinese civil war, when the defeated nationalist government retreated to Taiwan, the Republic of China -- as the island is officially known -- continued to maintain diplomatic relations and a United Nations seat, meaning there were effectively two Chinas competing for recognition and alliances.

As many countries opened relations with the People's Republic of China, they cut off ties with Taiwan, which lost its UN seat in 1971.