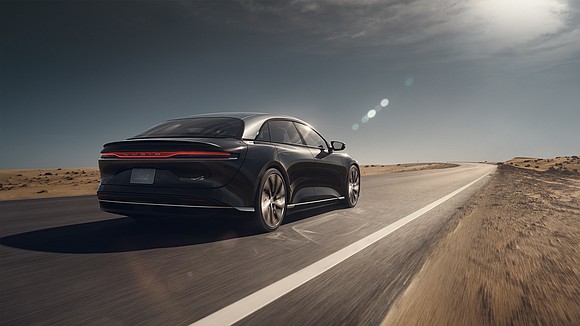 Lucid, an electric vehicle company headed by former Tesla engineer Peter Rawlinson, has announced that its upcoming Lucid Air car is expected to get an EPA-rated range of at least 517 miles./Credit: Lucid

By Peter Valdes-Dapena for CNN Business

(CNN) -- Lucid, an electric vehicle company headed by former Tesla engineer Peter Rawlinson, has announced that its upcoming Lucid Air car is expected to get an EPA-rated range of at least 517 miles.

That's far higher than other electric cars on the market today, including the Tesla Model S Long Range Plus, which has an EPA rated range of 402 miles. Tesla's was the first electric car widely available to consumers to have a driving range of more than 400 miles on a single charge.

The final production version of the Lucid Air is expected to be unveiled on September 9. The cars will be built in Lucid's Casa Grande, Arizona, factory. The first ones will be delivered to customers early next year.

Lucid's range claim is based on testing by FEV, a company that specializes in testing and development of various automotive systems. FEV's range test was closely modeled on the standardized test used by the Environmental Protection Agency to determine a gasoline car's fuel economy and an electric car's range. So it's expected that the official EPA range should be similar or maybe even slightly higher, a Lucid spokesman said.

California-based Lucid was founded in 2007 and unveiled a concept version of its electric car in 2016. The company originally focused on making electric vehicle batteries before it decided to produce its own car. The company's battery operations are now a separate division called Atieva, Lucid's original name, that supplies the batteries used in Formula E race cars.

Lucid also claims the Air will be capable of going from zero to 60 miles an hour in just 2.5 seconds. Doing that a lot, though, would probably reduce the car's total driving range.

Lucid hasn't yet revealed the size of the Lucid Air's battery pack, except to indicate that it will be smaller than the 130 kilowatt-hours company executives have previously talked about. The Tesla Model S Long Range Plus has a 100 KwH battery packet.

The company did not provide details on how this high range was achieved but, in general, credited aerodynamics, electronics, temperature control systems, as well the car's 900 volt electrical system.

That's high voltage for an electric car. By comparison, Porsche boasts of the 800-volt system it uses in its high-performance Taycan. Voltage is analogous to water pressure in a plumbing system. It's a measure of how much power can be pushed through an electric car's cables and wires and how quickly.

Lucid's CEO, Rawlinson, was once vice president of engineering at Tesla before leaving in 2013 to join the company that is now Lucid.

Lucid will join a number of startup companies, such as Nikola, Lordstown Motors and Rivian, looking to compete with Tesla not established automakers such as General Motors, Volkswagen and Ford.