Why Kamala Harris' shoutouts to AKAs and HBCUs matter so much 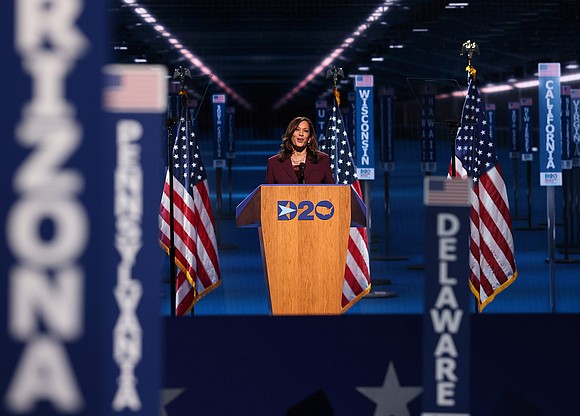 (CNN) -- Just because the speech wasn't too surprising doesn't mean that it wasn't impactful.

During the Democratic National Convention on Wednesday, Kamala Harris accepted her party's vice presidential nomination -- and as she did, she brought a rich history of Black womanhood with her, and embraced what makes her different at a moment afflicted by division.

Unlike some past cohorts of politicians, Harris didn't downplay the tapestry of her identity for the sake of a gauzy concept of unity. (Why would she? Hang-ups with her identity say more about others than her.) Instead, she elevated what makes her stand out -- in ways big and, seemingly, small.

"Family is my beloved Alpha Kappa Alpha, our Divine Nine, and my HBCU brothers and sisters," Harris said.

Harris' remarks couldn't have contrasted more with President Donald Trump's rhetoric over the past four years.

Nasty. Shithole countries. Go back. Whereas Trump has spent years using his position in the White House to excoriate otherness and to prop up the country's many hierarchies, Harris used the convention's stage to do the precise opposite.

"I accept your nomination for vice president of the United States of America," she said. "I do so, committed ... to a vision passed on through generations of Americans -- one that Joe Biden shares. A vision of our nation as a beloved community -- where all are welcome, no matter what we look like, where we come from, or who we love."

But she didn't just implicitly rebuke the President. She also pushed even those who view themselves as liberal to reexamine whom history has held up and rewarded.

"This week marks the 100th anniversary of the passage of the 19th Amendment. And we celebrate the women who fought for that right," Harris said. "Yet so many of the Black women who helped secure that victory were still prohibited from voting, long after its ratification."

She then said the names of some of the Black women who fought for access to the ballot, and for civil rights more broadly, but who've suffered from historical elision: Mary Church Terrell, Mary McLeod Bethune, Fannie Lou Hamer, Diane Nash, Constance Baker Motley, Shirley Chisholm.

"Without fanfare or recognition, they organized, testified, rallied, marched, and fought -- not just for their vote, but for a seat at the table. These women and the generations that followed worked to make democracy and opportunity real in the lives of all of us who followed," Harris said.

The newly minted vice presidential nominee name-checked someone else, too: her mother, who, for Harris, was just as much of a trailblazer as the aforementioned women.

"(Shyamala Gopalan) came here from India at age 19 to pursue her dream of curing cancer. At the University of California Berkeley, she met my father, Donald Harris -- who had come from Jamaica to study economics," Harris said. "They fell in love in that most American way -- while marching together for justice in the civil rights movement of the 1960s."