Oil and gas prices: What the one-two tropical storm punch in the Gulf means 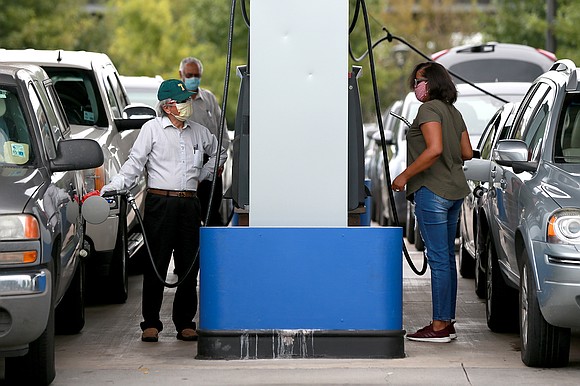 People wait in long lines for gas at Costo as they prepare for Hurricane Marco and Tropical Storm Laura on August 23, 2020 in New Orleans, Louisiana./Credit: Sean Gardner/Getty Images

(CNN) -- Two tropical storms -- Laura and Marco -- could hit America's Gulf Coast this week. In years past, that would send both oil and gas prices soaring. Not this year.

The reason is simple -- the United States can get by just fine without the oil and gasoline refining that could be shut by the storms. Record US oil production, combined with a sharp drop in demand for fuel during the Covid-19 pandemic, means there is record excess supply.

"In terms of crude oil, the US has never been in better shape," said Tom Kloza, chief oil analyst for the Oil Price Information Service, which tracks prices for AAA.

Some past storms, such as Hurricanes Katrina and Rita that hit in 2005, and Hurricane Harvey, which hit the refinery base in Texas very hard in 2017, resulted in spikes in gasoline and oil prices. Those storms came at times of high demand and much more limited supplies, Kloza said.

Demand for oil and gas has plummeted as millions of Americans no longer commute to work, either because of job losses or because they're working from home. The years of increased production in shale oil in the central United States means that the offshore oil platforms in the Gulf Coast aren't as important as they once were.

Even with half of the industry shuttered in advance of the storms, according to government figures, oil and gasoline future markets are not showing much movement.

"There's too much of a supply cushion, too much demand destruction to have any kind of devastating impact," said Kloza. "We'll see little impact on prices."