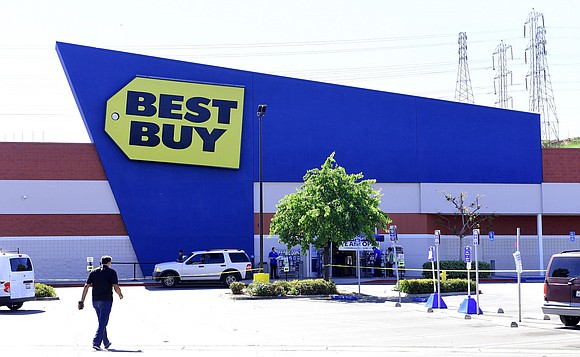 A near empty parking lot in front of a Best Buy store in Montebello, California on April 15, 2020 as the electronics nationwide chain store remains closed to customers but open for pickups./Credit: Frederic J. Brown/AFP/Getty Images

(CNN) -- Best Buy said Tuesday that its sales soared over the summer months but cautioned that the momentum may not continue given the uncertainty over a stimulus bill getting through Congress and the risk of higher unemployment.

Revenue was $9.91 billion in the quarter ended August 1, up 4% from the year earlier. Online sales surged 242%. The increase was largely driven by purchases of computers, laptops and appliances as families continue to adapt to working and learning from home.

However, the company did not provide forward-looking guidance and said it doesn't expect the pace of growth to continue in the third quarter.

"As we plan for the back half of the year, we continue to weigh many factors including potential future government stimulus actions, the current shift in personal consumption expenditures from areas like travel and dining out, the possible depth and duration of the pandemic, the risk of higher unemployment over time, and the availability of inventory to match customer demand," Best Buy's chief financial officer, Matt Bilunas, said in a statement.

Shares of Best Buy were down 7% to $109 in early trading on Tuesday.

Best Buy CEO Corie Barry, in a call with reporters Tuesday, said the federal government's stimulus checks had "provided a level of confidence" to consumers and helped to prop up spending in the quarter.

Going forward without them could lead to a "lack of confidence," she said.

As retailers prepare for the all-important holiday season, Barry said Best Buy plans to kick off its promotions earlier than usual. "We're preparing to start it in October," she said during the call. "It will be more drawn out with more promotional periods."