Pfizer and Moderna are testing their vaccines against UK coronavirus variant 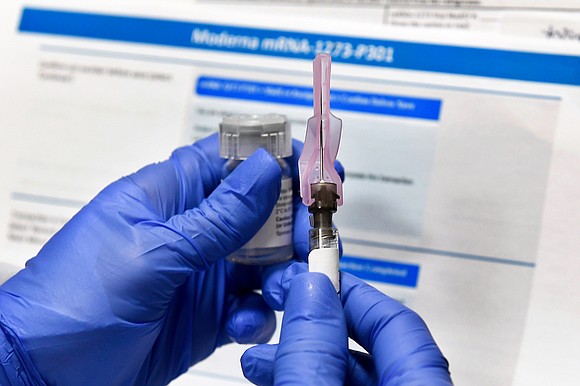 In this July 27, 2020, file photo, a nurse prepares a shot as a study of a possible COVID-19 vaccine, developed by the National Institutes of Health and Moderna Inc., gets underway in Binghamton, N.Y. The U.S. is poised to give the green light as early as Friday, Dec. 18, to a second COVID-19 vaccine, a critical new weapon against the surging coronavirus. Doses of the vaccine developed by Moderna Inc. and the National Institutes of Health will give a much-needed boost to supplies as the biggest vaccination effort in the nation's history continues. Credit: Hans Pennink/AP

(CNN) -- Pfizer and Moderna are testing their coronavirus vaccines to see if they work against the mutated version of the virus found in the United Kingdom and other countries, the companies said.

Travel between the US and UK, along with the high prevalence of the variant in UK infections, increases "the likelihood of importation," the CDC said.

"We expect that the Moderna vaccine-induced immunity would be protective against the variants recently described in the UK; we will be performing additional tests in the coming weeks," Moderna said.

Pfizer is "generating data," it said, on how well blood samples from immunized people "may be able to neutralize the new strain."

When will YOU get the vaccine?

US has not restricted UK travelers

The novel coronavirus has mutated before, and both companies' vaccines worked against other variations of the virus.

The importance of this mutation is uncertain, experts say, yet dozens of countries, including Canada, have imposed restrictions on UK travelers. The United States has not, but the White House is considering requiring travelers from the UK to present a negative coronavirus test before entering the US, two administration officials told CNN.

The UK variant "doesn't change what we need to do" to stay protected, US Surgeon General Jerome Adams said.

"We need to wear masks, wash hands, watch our distances and wait on gatherings, and we need to get vaccines, get vaccinated when those become available," he said.

The totals include cases from all 50 states, the District of Columbia and other US territories, as well as repatriated cases.

The outbreaks are not confined to one region. As of Monday evening, the states with the most new cases over the past week, adjusted for population, are Oklahoma, Tennessee, Texas, California and Rhode Island, according to CDC data.

More than 614,000 doses of the vaccine have been administered, CDC says. Tens of millions more are expected in coming months.

However, vaccine distribution should not cause Americans to drop their guards. Everyone should still take precautions to limit exposure, as new research published Tuesday in the journal, Physics of Fluid, warns mask-wearing without social distancing may not suffice.

Dr. Fauci says variant is probably in US

The UK variant probably is already in the US, said Dr. Anthony Fauci, director of the National Institutes of Allergy and Infectious Diseases.

"We're going to be looking for it right now, and I'm sure sooner or later we're going to run into it," he said.

Mutations are common, and most have no noticeable impact, Fauci said. Researchers are trying to determine if the UK variant is more transmissible, but Fauci said it doesn't seem to be more deadly.

Some researchers examining the genome of the UK variant have concerns the mutations might diminish the vaccines' effectiveness.

"You could imagine some modest hit in vaccine efficacy, which wouldn't be good, but I don't think it would break the vaccine," said Trevor Bedford, associate professor in the Fred Hutchinson Cancer Research Center's vaccine and infectious disease division.

Other experts are skeptical vaccines will be impacted.

"It doesn't make people more sick, and it doesn't seem to have any impact on the protective nature of the vaccine," Fauci said.

While "there is clear evidence that there is more of it in the population," there is no real evidence the variant is more transmissible, said Moncef Slaoui, chief scientific adviser for Operation Warp Speed.

The CEO of BioNTech, which collaborated with Pfizer on its vaccine, has "scientific confidence" the companies' vaccine will work against the variant, but full data won't be available for two weeks.

"We don't know at the moment if our vaccine is also able to provide protection against this new variant, but scientifically it is highly likely that the immune response by this vaccine also can deal with the new virus variant," Ugur Sahin said Tuesday.

The variant has nine mutations but shares all but nine of 1,270 amino acids with the previous version, so the protein remains effectively the same and BioNTech could develop a vaccine against a new variant in six weeks thanks to technology that allows researchers to "engineer vaccine which completely mimics this new mutation," Sahin said.

Fauci -- along with National Institutes of Health Director Dr. Francis Collins and US Health and Human Services Secretary Alex Azar -- were among those who received the Moderna vaccine Tuesday.

"We need 75-80 percent of Americans to receive vaccines in order to attain the so-called 'herd immunity' needed to drive SARS-CoV-2 away and allow us all to get back to a semblance of normal life," Collins wrote in a Tuesday blog post. "When your chance for immunization comes, please roll up your sleeve."

Since US vaccinations began last week, more than 4.6 million doses have been delivered, and about 614,000 have been administered, the CDC says.

The first round was given to those in assisted living facilities, federal officials and health care workers like Dr. Joseph Varon.

Varon, chief of staff at United Memorial Medical Center in Houston, was one of the first to get the Moderna vaccine, which was authorized for emergency use Friday.

"This is like having gold," Varon said, holding a box of doses. "I don't cry, but I came very close. ... You know how many lives you can save with this?"

Moderna's and Pfizer's vaccines, which have many similarities, had about 95% efficacy in clinical trials.

The first doses of Moderna's vaccine were sent to more than 3,500 sites, compared to about 600 for Pfizer's. Almost 8 million doses from Moderna and Pfizer will be distributed this week, Operation Warp Speed's Gen. Gustave Perna said.