Rick Ross’ 100-Pound Weight Loss Achieved to Save His Life 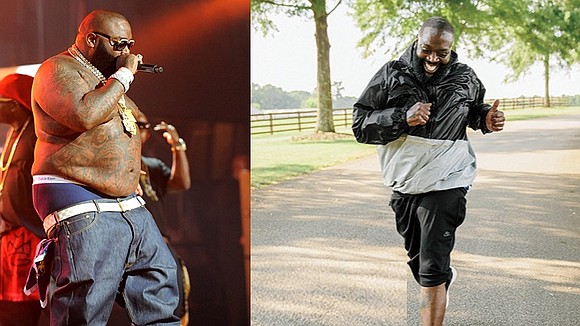 After the urging of his doctor, rapper Rick Ross changed his diet and exercise and saved his life by losing nearly 90 lbs. and adopting a healthier lifestyle.

In fact, after suffering two seizures in less than 24 hours in 2011, the “Bawse” found himself sitting in the waiting room of a very expensive doctor’s office. “I was the only black dude, and the rest was 55- to 80-year-old white males sitting in the room,” he says. “It was all silence and we all was kind of just looking at each other, like, ‘What the f*ck he here for?’”

The doctor checked his chart. “Right now, for you, based on everything you wrote down: sodas.” Drinking sodas wasn’t the only thing, but it was started point that Ross remembers.

The 43-year-old rapper who once tipped the scale at 350 pounds, has dropped down to right around 200 pounds after his weight loss in 2014 and has been able to keep the pounds off years later.

Ross discussed his weight loss plan of attack and routine in the new issue of Men’s Health magazine revealing that he’s not only lighter in weight, he feels good about life. “I’m happy,” Ross told the magazine. “I’m still losing weight, and now I’m starting to build hard muscle in places.”

In order to drop the weight, instead of going for a fad diet or cleanse to drop the weight fast, he chose a slower, more lasting route. Besides exercising with friends and creating a personal version of Cross Fit (a.k.a. “Ross Fit”), which he does four days a week, the Maybach Music Group boss works with a personal chef, and doesn’t deprive himself of guilty pleasures.

These days, Ross is all about portion control. He’s only allowed to indulge in eateries like Wingstop and Checkers one or twice a week, and between the hours of noon and 5 p.m.

“The Boss” recently launched a new app to provide anyone with high-quality physicians. Jetdoc is a mobile app that connects users directly with world- class medical professionals (physicians, physician assistants, and nurse practitioners) to provide quality virtual doctor visits with no wait times.

Jetdoc uses a secure video connection through our high-speed virtual interface and smart technology that keeps both patients and their personal information safe and secure.

For just $20, users can get a one-time virtual doctor visit. For $10 a month, users get unlimited video access to our arsenal of quality healthcare professionals for themselves and up to four family members whenever and wherever needed.

Jetdoc makes getting the most common prescription drugs easier, faster, and for 85% off the retail cost.

Ross also started working out with friends and came up with his own version CrossFit, which he calls “Ross-Fit.” Hey, it’s gets the job done.

Four days a week, Ross goes for a warm-up jog, and then sets up five exercise stations with moves like deadlifts and pushups, working through them for 30 minutes.