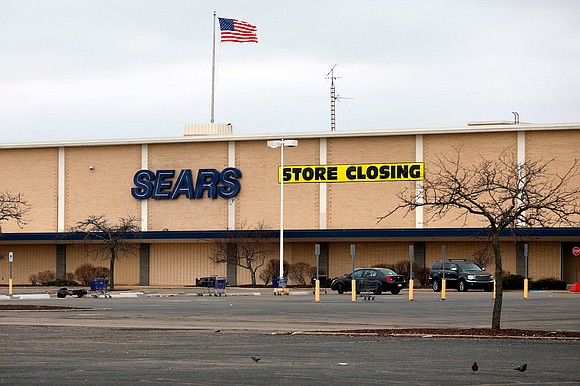 A Sears store that is going out of business in Livonia, Michigan on March 26, 2020. Credit: Jeff Kowalsky/AFP/Getty Images

(CNN) -- Sears has made it through another holiday shopping season. Just barely.

Once the nation's leading retailer up through the 1980s, the company that now owns the Sears and Kmart chains emerged from bankruptcy less than two years ago. It avoided another trip to bankruptcy court this year as the Covid-19 pandemic sent department store chains such as JCPenney and Neiman Marcus went through their own bankruptcies, while others such as Lord & Taylor and Century 21 announced they would go out of business.

But the fact that Sears isn't in bankruptcy is not a sign of health, according to experts. The company has made little effort to reinvigorate stores, grow sales or turn its failing business around. It's possible Sears would have gone out of business already this year, except the commercial real estate business has gone belly-up, and Sears would probably find few -- if any -- suitable offers for its assets.

"Everything is up for grabs. But of course, there is no market for department stores," said Mark Cohen, the director of retail studies at Columbia University, a former Sears executive himself. "They are, for all intent and purposes, done."

With no viable exit-strategy, both Sears and Kmart are slowly, quietly dying. They're closing stores where possible and listing virtually all of other locations with commercial real estate brokers.

There is little advantage for Sears to file bankruptcy, despite all the losses the now privately held company is surely running up (Sears' finances aren't public). Bankruptcy is useful to shed debt or other liabilities, but it is unlikely any financial institution or vendor has extended credit to Sears and Kmart since they completed their previous reorganization in early 2019, said Reshmi Basu, an expert in retail bankruptcies at Debtwire.

"This has been a slow motion liquidation," she said.

So the Sears and Kmart brands are on life-support because there is so little to be gained from closing them altogether. Once the commercial real-estate market improves, and new tenants can be found for their remaining stores, Sears will be under more pressure to close down the chains, according to the experts.

"Sears is biding its time until the market is more conducive," said Neil Saunders, managing director and retail analyst at research firm GlobalData.

The company has continued to sell off its brands that still have some value. A year ago it reached a deal to sell its DieHard automotive brand to Advance Auto Parts for $200 million. It sold Innovel Solutions, its product delivery and installation business, to Costco for $1 billion in a deal announced in March. Stanley Black and Decker bought Sears' Craftsman tool brand in 2017, and the company has been looking for a buyer for its Kenmore appliance business over the last few years.

While the company's spokespeople would not respond to questions about its financial condition, its plans, or its remaining store counts, the Sears and Kmart store locators on their websites show only 74 Sears department stores still open, and 48 Kmarts.

Those 122 locations represent 60 fewer Sears stores than there were in May, when malls began reopening after "nonessential" retailers had earlier been ordered closed to battle the pandemic. And it's down from about 400 stores from when it emerged from bankruptcy and nearly 1,000 stores in February of 2018, less than three years ago.