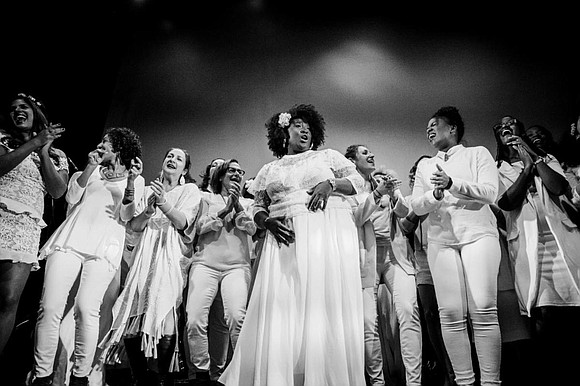 Resistance Revival Chorus has revealed details of their debut album, This Joy to be released on Ani DiFranco’s Righteous Babe Records. The Chorus is a collective of more than 60 women, and non-binary singers, who join together to breathe joy and song into the resistance, and to uplift and center women’s voices. Members are touring musicians, film and television actors, Broadway performers, solo recording artists, gospel singers, political activists, educators, filmmakers, artists, and more, representing a multitude of identities, professions, creative backgrounds, and activist causes. The album features original compositions along with protest classics and was recorded in New York City with GRAMMY-nominated producer Tiffany Gouché. The album is 100% created by women and non-binary artists. Righteous Babe’s Ani DiFranco says of the Chorus: “The RRC is like an antidote to silence and submission. In this age of division and hopelessness, let us listen to their collective voice and get lifted. Let us remember who we really are.”

Founded in the wake of the 2017 Women’s March the Chorus believe that art and culture are essential to changing hearts, minds, and history; and are committed to the principle that joy is in itself an act of resistance. The RRC centers women in music, and addresses how historically marginalized women have been in the music industry. They’ve backed Ke$ha at the GRAMMYS, performed on The Tonight Show with Jim James, sung Spanish lullabies to detained migrant children outside a New York holding facility, and been shouted-out on Twitter by hometown hero Alexandria Ocasio-Cortez. This spring they’ll perform at Harry Belafonte’s 93rd Birthday Celebration at the Apollo Theater and Carnegie Hall’s Tribute to Carly Simon. This summer they’ll perform at the world famous Bonnaroo Music & Arts Festival in Tennessee.

Managed by Ginny Suss, one of the chorus co-founders and former VP at Okayplayer, and co-founder of OkayAfrica, the Resistance Revival Chorus was also created by Paola Mendoza, filmmaker and author, and Sarah Sophie-Flicker, writer, director, performer -- the three of whom were also founders of the Women’s March. In addition, the chorus was founded by Shruti Ganguly, filmmaker and founder of honto88; Alyssa Klein, and Nelini Stamp, the national membership director for the Working Families. Additional members of the chorus include Abena Koomson-Davis, Meah Pace, Alba Ponce de Leon, Geminelle Rollins, Lee Taylor, Treya Lam, Nilusha Dassenaike and Abby Dobson.

Last week the Chorus were profiled on Pitchfork and quietly turned over their website to include some information on how to become a grassroots partner on This Joy. More on how you can get involved - and snag some limited edition rewards and gifts - HERE.