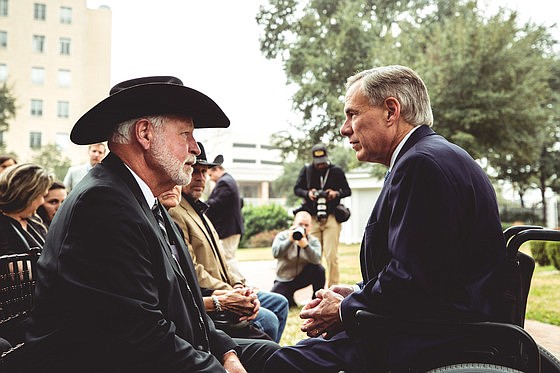 Governor Greg Abbott today presented the Governor's Medal of Courage to West Freeway Church of Christ hero Jack Wilson at the Governor's Mansion. The Governor thanked Jack for his willingness to risk his own life to protect others in the congregation, and expressed the state of Texas' enduring gratitude for Jack's heroic actions.

"When faced with an evil that few of us will ever comprehend, Jack Wilson responded with strength, bravery, and with love for those in the church that day," said Governor Abbott. "The courage in his actions cannot be understated, and Jack is not only a hero to West Freeway Church of Christ — he is a hero to the entire state of Texas."

Jack Wilson is the head of the volunteer security team at West Freeway Church of Christ in White Settlement, Texas. When a gunman opened fire on the congregation on December 29, 2019, Wilson jumped into action and fired a single round at the gunman, killing the gunman and preventing further loss of life.