Over The Edge: Reliving Houston's Dance With The 2020 Royal Rumble 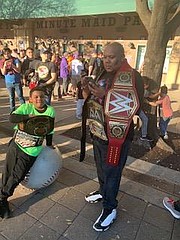 November’s Survivor Series, and the Granddaddy Of Them All ™, WRESTLEMANIA. The rumble is unique in both match type (a free-for-all where 1 of 30 contestants enter every 90 seconds, only able to be eliminated by being thrown over the top rope) and the prize: the winner earns the right to Main Event WRESTLEMANIA, the biggest wrestling show of the year.

While each Rumble is its own unique beast, this particular Rumble actually featured the “Beast Incarnate” himself, WWE Champion, Brock Lesnar. In a surprising twist, Lesnar decided to enter himself into the Rumble in order to prevent another wrestler from challenging him at WrestleMania in Tampa, Florida this year. The champion entering the Rumble is rare — it has only happened 4 times in the 33-year history of the Rumble and only twice since the “main event at Mania” stipulation was added beginning with the 1993 Rumble.

As such, this Rumble contained a different layer of intrigue than before. While the Women’s Rumble was pretty straightforward (Charlotte Flair, daughter of “Nature Boy” Ric Flair,

won an entertaining match), it was the men’s match that truly signaled a possible changing of the guard in the main event scene.

For a while, it seemed like Lesnar was going to steamroll through the entire WWE roster— established talents such Elias, Erick Rowan, Rey Mysterio, and The New Day (Big E & former WWE Champion Kofi Kingston) were swiftly eliminated, raising the ire of the crowd and building tension amongst the estimated 42,000 fans in Minute Maid Park. The creation of two acts began: the story of who would ultimately topple WWE’s most realistic monster and who would ultimately win the Rumble itself. 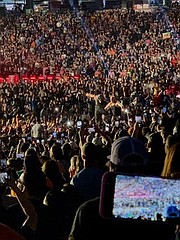 As competitor after competitor fell to Brock, the first spark of hope appeared: Keith Lee. Lee, the current NXT North American Champion, has been on a roll for the last three months, taking multi-time World Champion Roman Reigns to the limit at Survivor Series and winning the aforementioned North American Title only days prior to the Rumble. An imposing figure at 6’4, 300lbs, Lee’s size, and agility have earned him the moniker “Limitless.”

The Wichita Falls native immediately earned Lesnar’s respect, causing the former UFC Champion to pause and ask his manager Paul Heyman, “who’s this?” before they even locked up. Lee took Lesnar off his feet and nearly eliminated him from the Rumble. While unsuccessful, his work in the ring did not go unnoticed, as the WWE Universe showered him with applause upon his elimination.

Right as it felt like Brock was going to “Run the Table,” a burst of bagpipes rang through the park’s sound system, signaling the arrival of Drew McIntyre, probably the only wrestler in the company on a hotter streak than Lee. McIntyre’s story has been of redemption. Once fired from the company, he returned a new man in 2017 and later that year, he won the top prize of NXT, only to lose it and in the process, suffering a torn bicep at a pay-per-view in Houston.