True to the WWE’s nature, holding two events in Houston for Royal Rumble weekend meant something was to be had for everybody. NXT (pronounced N-X-T) is often recognized as the purest and most enjoyable form of WWE entertainment and they had their own version of an “All-Star Game” so to speak. 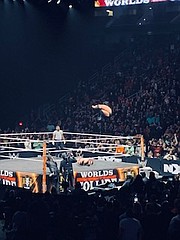 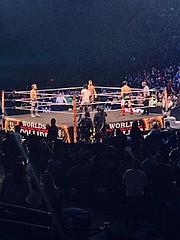 Mixing both talents from NXT domestic and the brand’s other talent pool located in the United Kingdom in NXT UK, Worlds Collide provided an interesting look into the future of WWE superstars, branding, and their efforts to expand their global footprint.

For those who follow the independent wrestling scene, Worlds Collide had a chance to be truly special. There were several dream matches on this card, including the main event, featuring the four-man factions of NXT’s Undisputed Era and NXT UK’s IMPERIUM, both led by the brand’s champions, Adam Cole and WALTER. For the last month, the two factions have been committing sneak attacks on one another on their respective shows, costing each side an opportunity to win championships, ratcheting the animosity to a fever pitch. Add in the scheduled tag match between NXT darlings #DIY (Johnny Gargano & Tommaso Ciampa) and NXT UK stalwarts Mustache Mountain (Tyler Bate & Trent Seven) and the announced match between the now villainous Finn Balor and UK’s Ilja Dragunov, and you had the makings of an outstanding night of wrestling.

For the most part, Worlds Collide did not disappoint.

All the matches contained hard-hitting, exciting action, with the Fatal Four Way for the NXT Cruiserweight Championship showcasing NXT’s international flair and the brilliant mix of in-ring storytelling and action. The match, pitting NXT’s Angel Garza (a native Mexicano, who received thunderous applause from the Houston crowd), Isaiah “Swerve” Scott,” and the UK’s Travis Banks and Jordan Devlin in opposition did not disappoint. Several near falls, big-time dives and a satisfactory finish with Devlin pinning Scott with his finisher, the side suplex, he did something few of his fellow countrymen could not do: win over a very pro-NXT domestic audience.

All the matches were excellent showcases of the talent amassed under the NXT umbrella, but it was clear that the crowd didn’t have a connection with many of the UK talents. It caused a disconnect in the overall match presentation, hampering Balor and Dragunov most of all. In wrestling, the alignments of good versus bad are your basic form of storytelling. With Balor being a beloved bad guy, fans saw no reason to even care about Dragunov. The problem persisted throughout the show, ending with the crude “USA” chants hurled towards IMPERIUM at the beginning of the main event. Lazy, jingoist chants should no longer have a place in professional wrestling, and the sooner they are gone, the better. 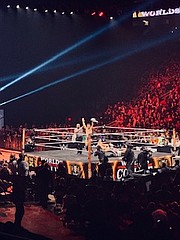 That said, Worlds Collide was an excellent showcase event of the vast stores of talent that WWE has waiting in the pipelines for eventual storylines on Raw or Smackdown. If this type of dream match show is going to replace an NXT: Takeover PPV once a year, count me in!

Better Than You Remember: Finn Balor vs Ilja Dragunov