Everyday words and phrases that have racist connotations 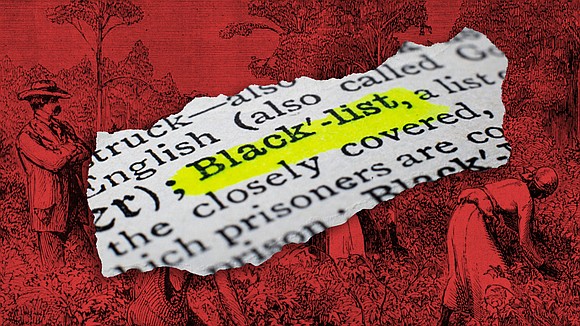 The words and phrases permeate nearly every aspect of our society. "Master bedrooms" in our homes. "Blacklists" and "whitelists" in computing. The idiom "sold down the river" in our everyday speech. _Credit: Photo-Illustration: Getty Images/CNN

And last week Twitter announced it's dropping "master," "slave" and "blacklist" from its code after two engineers lobbied for the use of more inclusive programming language. America's biggest bank, JPMorgan Chase, says it's taking similar steps.

"Words matter," a Twitter engineer said about the move.

Blacklist/whitelist: In tech, a blacklist refers to a directory of specific elements, such as email addresses, IP addresses or URLs, that are blocked. A whitelist, by contrast, is made up of elements that are allowed.

Though the origins of those terms don't appear to be directly connected to race, some argue that they reinforce notions that black=bad and white=good.

Google's Chromium, an open-source browser project, and Android's open-source project have both encouraged developers to use "blocklist" and "allowlist" instead.

And recently, the National Institute of Standards and Technology -- a federal agency that develops technology, metrics and standards for everything from atomic clocks to computer chips -- said it would stop using computer security terms with racist overtones. The agency said it would formally urge other organizations to drop them too.

The Masters Tournament: It's one of the four major tournaments on the PGA tour and is usually called simply, "the Masters."

The history of the name goes back to 1934, when the tournament was first held at Augusta National Golf Club in Georgia. Clifford Roberts, one of the co-founders, wanted to call the event the "Masters Tournament," according to the tournament's website. But co-founder Bobby Jones rejected the idea over concerns that it was too "presumptuous."

Roberts finally got his way in 1939. The name appears to have been a reference to golfers with great skills, but its connotations have brought the name under scrutiny.

Deadspin sportswriter Rob Parker recently called on the tournament to change its name.

Parker argues the name evokes slave masters in the US South, especially given the history of the golf course where it's held.

For decades Augusta National Golf Club required that all caddies be Black. It also banned Black golfers from the Masters Tournament until 1975, when Lee Elder broke its color barrier.

Peanut gallery: The phrase typically refers to the cheapest seats in a theater, and is informally used to describe critics or hecklers.

When someone says "no comments from the peanut gallery," it implies that a certain group of commentators is rowdy or uninformed.

The term dates back to the vaudeville era of the late 19th century and referred to the sections of the theater where Black people typically sat. Jeffrey Barg, who writes a language column for the Philadelphia Inquirer, noted recently that the first documented use of "peanut gallery" appeared in the New Orleans Times-Picayune in 1867.

The term was cemented in pop culture in the 1940s, when the radio show "Howdy Doody" used it to refer to its live audience of children. That name also carried over to the TV version of "Howdy Doody" in the 1950s.