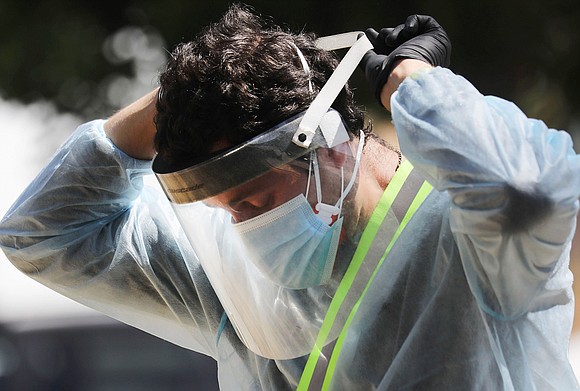 LOS ANGELES, CALIFORNIA - JULY 07: A COVID-19 testing associate adjusts his personal protective equipment (PPE) at a testing center at Lincoln Park amid the coronavirus pandemic on July 07, 2020 in Los Angeles, California. There has been a spike in new coronavirus cases in California along with an increase in the overall positivity rate and number of hospitalizations. (Photo by Mario Tama/Getty Images)/Credit: Mario Tama/Getty Images

It took just 43 days after that to reach 2 million cases.

And 28 days later, the US reached 3 million cases of the novel coronavirus Wednesday.

The ferocious speed at which Covid-19 spreads has astounded doctors, with over 131,000 people dying from the disease since January, according to data from Johns Hopkins University.

And in 35 states, the rate of new cases keeps increasing -- threatening to reverse progress made during weeks of painful shutdowns and stay-at-home orders.

Some hospitals are running out of ICU capacity

Health officials say many Americans have fallen into a false sense of security as states started reopening, abandoning safety measures such as social distancing and wearing face masks.

And while the death rate has generally declined in recent weeks, "it's a false narrative to take comfort in a lower rate of death," Dr. Anthony Fauci, director of the National Institute of Allergy and Infectious Diseases, said Tuesday.

The White House has suggested that the decreasing death rate is a sign that Covid-19 is under control. But other metrics continue to surge.

The US set a new record for the most number of cases reported in a single day -- 60,021 on Tuesday.

In Florida, 56 hospitals are out of capacity in their intensive care units.

In Arizona, the state has set new records for daily death counts about once a week, including Tuesday -- the same day the state reported its lowest-ever number of ICU beds available.

"Our hospital is already in dire straits, and they tell us in the next two weeks it is going to get to an unbearable level of crisis."

California and Texas are among the states setting new records as well.

With nearly 6,000 patients Tuesday, California hospitalizations are at an all-time high. Tuesday saw a 3.4% increase in new patients from the prior day.

The state also recorded a record number of Covid-19 patients in intensive care units, according to data from California Department of Public Health.

Texas had its highest single day increase in coronavirus cases Tuesday, with 10,028 new cases reported. The total for the state is now more than 210,000 cases and 2,715 deaths.

Texas Gov. Greg Abbott announced that a testing site in Edinburg will offer 5,000 free tests a day between Wednesday and July 14 in an effort to increase testing in hot spots.

"This new surge testing site will help us identify and mitigate the spread of COVID-19 in the Rio Grande Valley and keep Texans safe," Abbott said.

As of Monday, 35 states plus Washington DC and Puerto Rico had implemented some type of mask requirement. Fauci said he is "strongly in favor" of the mandates to curb the spread.

"When you look at what we can do that we know works, it's the use of masks, physical distance and avoiding crowds," Fauci said Tuesday.

"So, if you're saying it doesn't matter whether you put it on or take it off, you're giving a wrong, mixed signal. The signal should be: Wear a mask. Period."

If most Americans heed that signal, as many as 45,000 fewer Americans will die of coronavirus this fall, according to Dr. Chris Murray, the director of the University of Washington's Institute for Health Metrics and Evaluation (IHME).

The newest model, released Tuesday, projects as many as 208,000 coronavirus deaths by November 1.

The new death rate stems from the recent surge in cases combined with seasonality and schools reopening, Murray said.

But that number drops to 163,000 if most Americans wear a face mask, according to the model.

"It's an incredibly simple strategy and intervention," Murray said. "It's one that will save lives, but it will also help the economy enormously because it will avoid shutdowns which will inevitably come when things get quickly out of control in some states."

Some college students may return in fall

Colleges and universities across the country are navigating how to safely reopen and keep students in the classroom come the fall semester.

New York University has implemented mask requirements and social distancing measures for the next semester. Caps will be placed on enrollment and space capacity, and classroom occupancy will be reduced by 50%, according to an email from NYU leadership to the community.

As soon as July 15, all students, faculty and visitors to the University System of Georgia will also be mandated to wear masks, USG announced on its website.

And though Columbia University announced undergraduates and students of Columbia College and the Fu Foundation School of Engineering and Applied Science will return in the fall, only 60% will be welcomed back. Most classes will still be taught in remote or hybrid form.

Brown University will shift its calendar and add a summer term to accommodate more students on campus at separate times, according to a letter to students from University President Christina Paxson.

The university will also offer virtual learning courses to all students, regardless of whether they are living on campus, and all classes with more than 20 students will be conducted remotely.

Advocates of higher education asked Congress on Tuesday to approve federal aid to help colleges and universities to avoid budget cuts in the upcoming academic year.

"Higher education is a public good that benefits the entirety of our nation and our nation's position in a global economy," said Shaun Harper, president of the American Educational Research Association.