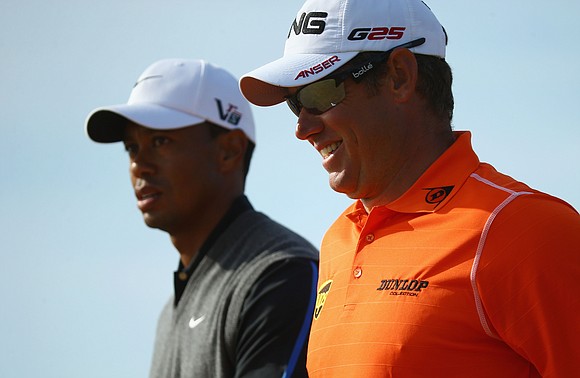 Lee Westwood (right) says the despite the "best player" in golf --Tiger Woods (left) -- being Black, golf can do more to promote the game with non-White players./Credit: Matthew Lewis/Getty Images Europe/Getty Images

(CNN) -- Former world No. 1 golfer Lee Westwood says golf has some work to do in addressing issues of diversity within the sport and that it's "dominated by White people."

While many other sportspeople and sports organizations like Formula 1, the NFL and Premier League soccer have been vocal in support of the Black Lives Matter movement since the killing of George Floyd, Westwood agrees that golf has been far quieter.

During an Instagram Live interview yesterday with CNN's Amanda Davies, he said: "You know, arguably, the best player in our sport is Black [Tiger Woods] and he's done a lot to promote golf in different ethnic quarters. But I think we can always do more for sure."

'Sport should be for everybody'

During the PGA Tour's resumption at the Charles Schwab Challenge last month, a moment of silence was held during each round in place of the 8:46 a.m. CT (2:45 p.m. BST) tee time. Eight minutes and 46 seconds is how long Floyd was filmed pinned under the police officer's knee.

Briton Westwood said part of the problem is the perception of golf as a "White sport."

"I think it's still perceived as a White sport if I'm being completely honest," he said. "If you look at the people that partake in it, and certainly the crowds that turn up, it's dominated by White people.

"There's not enough Black people that come into the game. I don't know what the answer is to that. But there has to be an answer because sport should be for everybody, shouldn't it?"

In a statement sent to CNN Sport, the European Tour said it played in 31 countries across five continents, had members from 35 countries and winners from 36 countries since the Tour began in 1972.

"We are the gatekeepers of the professional game and we discriminate against nobody," added the Tour statement. "Anyone who comes through the junior or amateur ranks, from any country, to qualify for our Tour, we welcome with open arms.

"Diversity is something we celebrate each day, but at the same time we also continue to listen and work on ways to broaden golf's appeal, and golf participation, to all areas of society. We also stand in solidarity with everyone wishing to end all forms of discrimination."

The Royal & Ancient Golf Club of St. Andrews, which together with the US Golf Association (USGA), governs the sport of golf worldwide, was not immediately available to comment at the time of publication.

In the US, approximately 25% of those who played on a golf course for the first time in 2017 were non-White.

The PGA Tour sent a statement to CNN Sport, saying: "We agree with Lee that our game is not as diverse as we would like from an audience, recreational or player perspective.

"However, we at the PGA Tour have a considerable amount of optimism and are committed to doing more, in Diversity and Inclusion."

The organization also indicated that it has plans to announce a substantial commitment to social and racial justice causes in the coming months.

The USGA did not immediately respond to CNN's request for comment.

Westwood singled out the cost of playing golf as a significant barrier to entry.

According to a 2018 survey by the Golf Channel, the median cost of an 18-hole round at a public golf course is $36 including cart, but excluding clubs.

Private golf clubs are particularly expensive. According to a study of private clubs carried out by Longitudes Group for Golf Digest, the most elite clubs demand an initiation fee of between $250,000 and $500,000.

Only 30% of responding private clubs had a list price of $7,500 or less. That is without annual "dues" (membership fees) which, according to the survey, cost an average of $6,245 (approximately $520 per month). Some clubs also require a minimum amount to be spent in the club shop and bar every month.

Meanwhile the Ryder Cup, has been postponed to 2021.

Organizers said that the decision to postpone this year's event was based on guidance from the Centers for Disease Control and Prevention.

"It became clear that as of today, our medical experts and the public authorities in Wisconsin could not give us certainty that conducting an event responsibly with thousands of spectators in September would be possible," said PGA of America CEO Seth Waugh in a statement.

"Given that uncertainty, we knew rescheduling was the right call."