Fisker plans to go public in a $2.9 billion deal 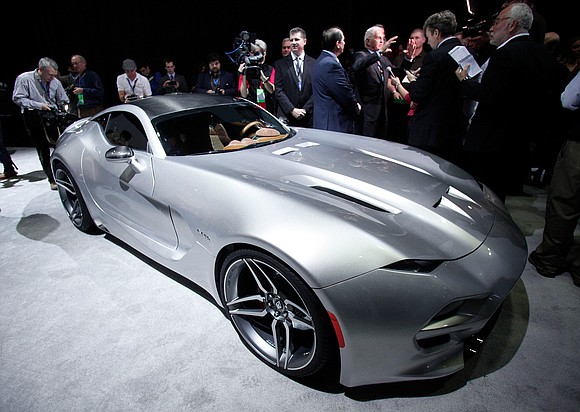 The Fisker Force 1 sports car is revealed to the news media at the 2016 North American International Auto Show January 12th, 2016 in Detroit, Michigan. The body of the Force 1 is all carbon fiber, and the limited-edition vehicle will be priced just under $300,000. The NAIAS runs from January 11th to January 24th and will feature over 750 vehicles and interactive displays./ Credit: Bill Pugliano/Getty Images

The two companies announced the $2.9 billion deal Monday, which is expected to close in the fourth quarter of this year. In the agreement, Fisker will merger with Spartan Energy Acquisition, an affiliate of Apollo.

The deal will help Fisker bring to market its Ocean SUV, which was unveiled at the Consumer Electronics Show earlier this year.

The new vehicle is "designed for optimal space and usability," according to Fisker. It includes features like a a "California Mode" button, which opens all the windows at one touch and a rear hatch window that can roll down to allow long items -- such as surfboards -- to hang out the back. The Fisker Ocean will be available in late 2022 and cost about $40,000.

Fisker Automotive, a separate car company also founded by auto designer Henrik Fisker, began more than a decade ago. The first vehicle, Karma, was a plug-in hybrid that drew low ratings from Consumer Reports. Production of the Karma ended when the company declared bankruptcy a few years later and its assets -- including some unassembled cars -- were auctioned off. The hybrid has since been developed further, and is now being produced by another company, Karma Automotive.

Henrik Fisker said in a release Monday that the deal is a "vote of confidence from investors."

"Today, the realization of the world's first digital car company took another major step forward, advancing our mission to commercialize the world's most emotional and sustainable vehicles, while upholding our vision of a clean future for all," he said.