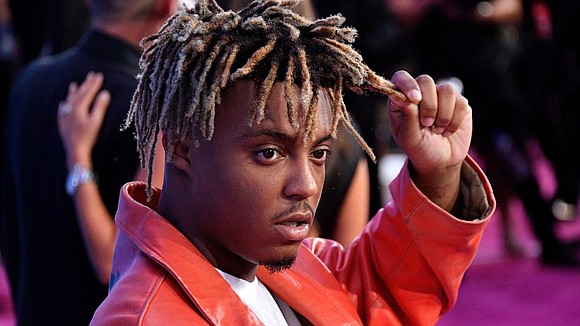 The rising star died of an accidental drug overdose six days after his 21st birthday in December.

But a collection of tracks he recorded before his death was compiled for the album, which was released just after midnight Friday morning.

The record opens with an emotional skit featuring audio of the star talking about anxiety and substance abuse, and sharing an encouraging message to fans.

"Music is just a beautiful thing, like I love myself so much, as far as the way I make music, the way God made me, the way God wired me to do the things that I do, and to change the world the way that I can," he says in the track.

"Before I get up out of here, I wanna tell you that you can do anything you put your mind to, period."

The 55-minute record features collaborations with Marshmello, Halsey and rapper Trippie Redd, and includes three singles that had already become popular on streaming services -- "Righteous," "Tell Me U Luv Me" and "Life's A Mess."

The album ends with another skit, "Juice WRLD Speaks From Heaven," which features audio of him talking in 2019. "I'm on Instagram Live from Heaven, huh. I made it y'all, I'm up here, I'm boolin'. Haha, I love y'all to death. How can I ask for better fans or supporters?" he says in the ominous recording.

Some fans reported on social media that Juice's artist page on Spotify crashed in the hours after the album's release, sharing screenshots of an error message. CNN has contacted Spotify for comment. Later on Friday, Spotify's app appeared to stop loading for many users.

Juice was an ascending star on the American rap scene and had featured on Eminem's release "Godzilla" before he died. He also collaborated with some other top names in music, including Ellie Goulding and Future.

His biggest hit, "Lucid Dreams," peaked at No. 2 on the Billboard Top 100 in October of 2018, according to the music chart, and tracks like "Robbery" have enjoyed sustained success throughout 2020.

Juice, who was born Jarad Anthony Higgins, died as a result of oxycodone and codeine toxicity, the Cook County Medical Examiner's Office said in January.

The medical examiner determined the rapper's death to be an accident.

Juice suffered a medical emergency shortly after arriving at Chicago's Midway International Airport in early December, Chicago police spokesman Anthony Guglielmi told CNN at the time. The musician died in a hospital, according to police.