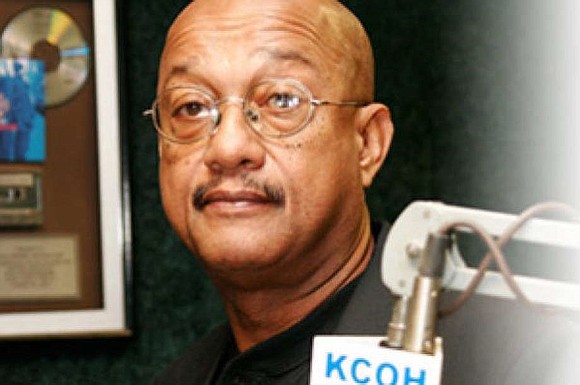 To recognize a media legend who has kept Houston-area residents informed about sports and news for more than a half century, Harris County Commissioner Rodney Ellis congratulated Ralph Cooper at Commissioners Court on Tuesday for his induction into Texas Radio Hall of Fame.

“There aren’t too many people, especially in my generation, who haven’t heard Ralph Coopers voice on the radio,” said Commissioner Ellis, who virtually presented Cooper with a resolution during Commissioners Court. “He has an immense following and extensive knowledge, especially of sports. His printed words and distinctive voice have graced Houston newspapers and radio stations for decades.”

The resolution says Cooper’s “engagement with journalism began as a 10-year-old boy selling periodicals door-to-door before becoming first a salesman and then a reporter for The Forward Times in 1969.

Cooper, widely regarded as a local legend, has been “consistently recognized for his excellence and broadcasting and service to his community, including receiving a lifetime achievement award from the Houston Association of Black Journalists in 2010,” the resolution says.

Cooper thanked Commissioners Court for the “all the accolades.” Also, he encouraged court members to continue their hard work during the COVID-19 pandemic.

“If you really want to salute Ralph Cooper, make Houston safe as possible,” Cooper said Tuesday. “Don’t give up. You are talking to a guy that came from a neighborhood of great athletes and great people like Rodney. And we were taught never give up, no matter how bleak it may look. Never give up.”

The Texas Radio Hall of Fame is dedicated to honoring the greats in Texas radio. Nominees must have worked in Texas during their broadcasting career, and made a significant impact on their community, the industry and those around them.

Cooper fits that description, having worked his entire career in Houston, where his name is synonymous with sports.

The Houston native began his journalism career in 1969 as a reporter for the Forward Times newspaper covering courts and junior high sports. In 1973, he started working at KYOK Radio, where he remained for 11 years until he moved to his current employer, KCOH (1430 AM).

Over the years, he has worked at the Houston Post, the Houston Defender and KTRK-Channel 13.

“Cooper is a walking encyclopedia of sports trivia and history,” Commissioner Ellis said. “Like many of the Hall of Famers he has interviewed over the last 50 years, he so much deserves a place in the Radio Hall of Fame.”