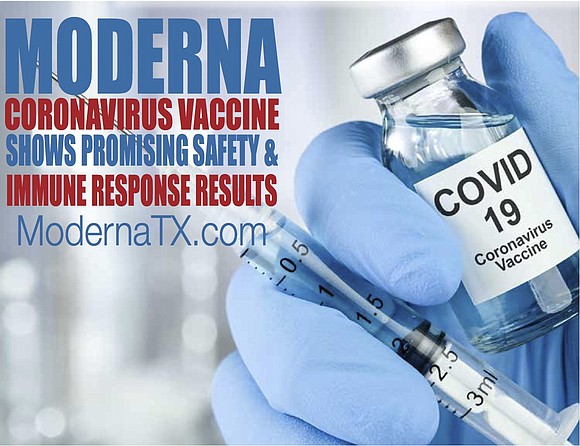 The volunteers were separated into groups where they either received the vaccine at a dose of 25, 100 or 250 micrograms. They received their first vaccination between March 16 and April 14.

"The first dose sort of sets the immune system up, it's called priming," Jackson said. "So that when you then administer the same thing again, there's a booster response. There's an augmented response. So we did not think that one vaccination would be sufficient to get the level of response that we wanted to see."

The researchers found "no trial-limiting safety concerns" after volunteers received their two doses of vaccine, but there were some mild to moderate side effects, such as some pain at the injection site, and there were more of those the higher the dose of the vaccine.

The most commonly reported systemic adverse events following second vaccination at the 100-microgram dose were fatigue, among 80%; chills, among 80%; headache, among 60%; and myalgia or muscle pain, among 53%; all of which were transient and mild or moderate in severity, as noted in Moderna's press release.

The study data also showed that the vaccine induced an antibody response. Antibodies are the proteins the body makes to fight infection.

"Those two types of responses support each other. We know that the antibodies are being produced and it appears that there's function after vaccination that serves to block the ability of the virus to enter cells. So it neutralizes the activity of the virus," she said.

But more research is needed.

"What do we really want to know? We want to know whether the vaccine is safe and effective, that's what we want to know," said Dr. Paul Offit, a member of the NIH panel that's setting a framework for vaccine studies in the United States, who was not involved in the new study.

With the study, "we know that it's safe in 45 people, which is not going to be the 20 million people or 200 million people who are going to get it here in the United States," said Offit, who is also director of the Vaccine Education Center and an attending physician in the Division of Infectious Diseases at Children's Hospital of Philadelphia.

"So we know that it doesn't have a very common side effect problem, that's what we know," he said. "Then we don't know anything about efficacy, which is what we really want to know. Is this vaccine going to work? The only way to know that is to do a so-called Phase 3 trial."